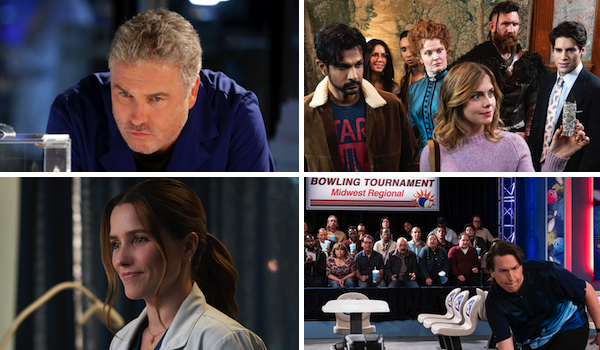 Following the announcement of its 2021-2022 primetime schedule this morning, CBS has now released trailers for its new shows.

NCIS: HAWAI ‘ I (Monday, 10:00 p.m.)
This new spin-off of the NCIS franchise focuses on the first female Special Agent in Charge of NCIS Pearl Harbor, Jane Tennant (Vanessa Lachey), who has thrived and risen through the ranks by equal parts confidence and strategy in a system that has pushed back on her every step of the way. Together with her unwavering team of specialists, they balance duty to family and country while investigating high-stakes crimes involving military personnel, national security and the mysteries of the sun-drenched island paradise itself. The series stars Vanessa Lachey as Special Agent in Charge Jane Tennant, Yasmine Al-Bustami as Lucy, Jason Antoon as Ernie, and Noah Mills as Jesse.

FBI: INTERNATIONAL (Tuesday, 9:00 p.m.)
The third iteration of the FBI brand follows the elite operatives of the Federal Bureau of Investigation’s International Fly Team. Headquartered in Prague, they travel the world with the mission of tracking and neutralizing threats against American citizens wherever they may be. Not allowed to carry guns, the Fly Team relies on intelligence, quick thinking and pure brawn as they put their lives on the line to protect the U.S. and its people.

This fall, the hunt goes global. Tuesday nights start at 8/7c with #FBICBS, followed by the new #FBIInternational, then @MostWantedCBS, from @CBS and @WolfEnt. pic.twitter.com/3oOwwoqsDB

CSI: VEGAS (Wednesday, 10:00 p.m.)
CSI: VEGAS is returning to the city where it all began. Facing an existential threat that could bring down the entire Crime Lab and release thousands of convicted killers back onto the neon-lit streets of Vegas, a brilliant new team of investigators led by Maxine Roby (Paula Newsome) must enlist the help of old friends, Gil Grissom (William Petersen), Sara Sidle (Jorja Fox) and David Hodges (Wallace Langham). This combined force will deploy the latest forensic techniques to do what they do best—follow the evidence—in order to preserve and serve justice in Sin City. CSI: VEGAS stars original “CSI: Crime Scene Investigation” cast members William Petersen, Jorja Fox and Wallace Langham, who will reprise their roles as Gil Grissom, Sara Sidle and David Hodges, respectively; Paula Newsome as Maxine Roby; Matt Lauria as Joshua Folsom; Mandeep Dhillon as Allie Rajan; and Mel Rodriguez as Hugo Ramirez.

Crime's luck has run out. @CSICBS, Wednesdays this fall on CBS. ? pic.twitter.com/ojs2S78wps

GHOSTS (Thursday, 9:00-9:30 PM)
This single-camera comedy is about Samantha (Rose McIver) and Jay (Utkarsh Ambudkar), a cheerful freelance journalist and up-and-coming chef from the city, respectively, who throw both caution and money to the wind when they decide to convert a huge rundown country estate they inherited into a bed & breakfast—only to find it’s inhabited by the many spirits of deceased residents who now call it home. The departed souls are a close-knit, eclectic group that includes a saucy Prohibition-era lounge singer, a pompous 1700’s Militiaman, a ‘60s hippie fond of hallucinogens, an overly upbeat ‘80s scout troop leader, a cod-obsessed Viking explorer from 1009, a slick ‘90s finance bro, a sarcastic and witty Native from the 1500s, and a society woman and wife of an 1800’s robber baron who is Samantha’s ancestor, to name a few. If the spirits were anxious about the commotion a renovation and B&B will create in their home, it’s nothing compared to when they realize Samantha is the first live person who can see and hear them. The show stars Rose McIver as Samantha, Utkarsh Ambudkar as Jay, Danielle Pinnock as Alberta, Brandon Scott Jones as Isaac, Richie Moriarty as Pete, Asher Grodman as Trevor, Sheila Carrasco as Flower, Román Zaragoza as Sasappis, Devan Chandler Long as Thorfinn, and Rebecca Wisocky as Hetty.

GOOD SAM (Midseason)
The series stars Sophia Bush (“Chicago” franchise, “One Tree Hill”) and Jason Isaacs (STAR TREK: DISCOVERY, “Harry Potter” films) in a drama about Dr. Sam Griffith (Bush), a gifted heart surgeon who excels in her new leadership role as Chief of Surgery after her renowned boss falls into a coma. When her former boss wakes up months later demanding to resume his duties, Sam is tasked with supervising this egotistical expert with a scalpel who never acknowledged her stellar talent. Complicating matters is that the caustic and arrogant Dr. Rob “Griff” Griffith (Isaacs) also happens to be her father. As Griff defies Sam’s authority and challenges her medical expertise, the big question becomes whether this father and daughter will ever be able to mend their own relationship as expertly as they heal the hearts of their patients. In addition, GOOD SAM also stars Skye P. Marshall as Dr. Lex Trulie, Michael Stahl-David as Dr. Caleb Tucker, Davi Santos as Dr. Joey Costa, Omar Maskati as Dr. Isan M. Shah, Wendy Crewson as Vivian Katz, and Edwin Hodge as Malcolm A. Kingsley.