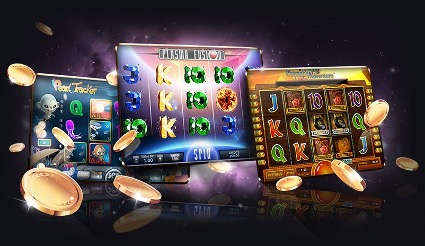 Slot machines are unarguably one of the most popular gaming activities in the world, whether online or at a land-based venue, and over the years have become a vital part in the gambling industry, especially in the iGaming market.

Last year, with the COVID-19 pandemic, cities all over world going under lockdowns, and people staying home to comply with social distancing measures, playing online slots became a safe alternative for punters. Since most iGaming operators today offer huge catalogs of slots, and players can even enjoy them on mobile devices, it became easier than ever playing these games.

One of the best aspects about slots is the huge variety of games and themes. The industry is composed of several major companies that develop and publish many new titles every month. And, of course, themed games are one of the main attractions among slots, with numerous licensed slots from some of the most popular movies and TV shows. However, since the selection of iGaming operators and slot games is so large, websites like CasinoHelp.ca can be very helpful for players trying to find trustworthy operators, information on games and developers, and even special bonuses and promotions.

So let’s take a look at some of the best slot games based on TV shows and movie franchises available today.

One of the latest releases by NetEnt, an important company in this market, is Gordon Ramsay’s Hell’s Kitchen video slot. This one is a bit unusual, but Ramsay is one of the most famous chefs in the world, having earned 16 Michelin stars and transcended the culinary world to become an internationally recognized icon. So it was only natural that his most famous show, Hell’s Kitchen, made its way to the slots.

This game is a 5-reel, 3-row video slot featuring Ramsay’s signature dishes and iconic catchphrases. Three of Ramsey’s famous glaring stares are included as Scatter symbols, and activate Team Challenge Free Spins, with multipliers and random prizes up to five times the bet. 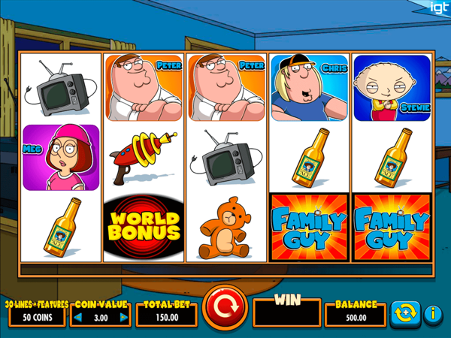 Developed by IGT, one of the oldest companies in the industry, the Family Guy slot game takes the popular Fox show to a whole new level. Fans of Peter Griffin & Family will certainly be enticed to try out this slot, which features every single character from the show.

The Family Guy slot is a 5-reel, 3-row game, with 30 paylines and bets ranging from $1 to $1,500 per spin. There are seven different bonus features, one for each character from the show, and there is even a Chicken Fight! Bonus, which triggers the famous altercation between Peter and the giant chicken, and can give players multipliers of up to 1000x the original bet.

One of the most successful entertainment brands in the world, the genre-defining HBO series is obviously featured in a slot game. The game was released by Microgaming, which is the company that launched the first online casino in the 1990s, and is one of the most recent titles in this list.

Game of Thrones Power Stacks is a 5-reel, 3-row video slot, available in both 15 paylines and 243 ways. The game features 4 great houses from the show, and players can choose to play as Baratheon, Lannister, Targaryen, or Stark. Each house offers a different number of spins and multipliers. Direwolves, White Walkers, and the Three-Eyed Raven also make appearances in the game. 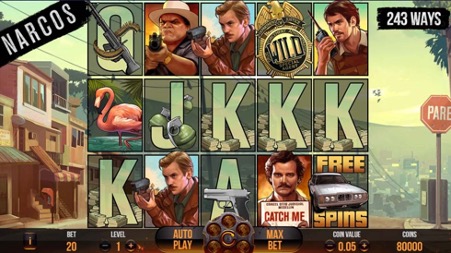 Based on the global hit Netflix series Narcos, this slot by NetEnt focuses on the agents hunting down infamous Colombian crime boss Pablo Escobar. The game features several characters from the show, including agents Peña and Murphy, and even some of the animals that Escobar had in his ranch.

Narcos is a 5-reel, 3-row video slot with 243 bet ways, and ten different paying symbols. The game also features bonus multipliers of up to 10x the stake, and scatter symbols that trigger free spins rounds.

Another NetEnt title, the Jumanji slot is based on the original classic Jumanji movie from 1995, starring Robin Williams, Kirsten Dunst, and Bonnie Hunt. This slot is among the first of its kind, as it combines elements of board games and free spin features, with four different free spins, a mystery feature, coins wins, and extra dice rolls.

Praised for its graphics, animation, and sound effects, this slot uses a 5-reel layout, with bets ranging from $0.10 to $100. There are 36 fixed paylines, and its rewards can go up to 504x the total stake.