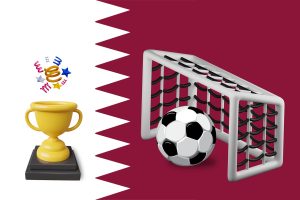 Soccer documentaries in Netflix during the Qatar 2022 World Cup period

When you like something a lot, you always want more. When Christmas finally arrives, it is tradition to watch all the classic Christmas movies to feel the season’s spirit like the ones suggested by The TV Addict. This same principle applies to the 2022 Qatar World Cup; it has already started and people want more. One way to entertain yourself between breaks can be by watching soccer documentaries. A great variety is available on Netflix; you can watch documentaries about teams, soccer feats and the biographical accounts of great players or soccer legends.

In addition, with the titles offered by Netflix, you will be entertained and learn more about this most popular of sports. They are very carefully prepared productions that tell stories based on real events. Some may only focus on one player, but others are about great moments that have been lived on a soccer field. Watching these documentaries, one can get into an atmosphere full of soccer, which is already noticeable as everything revolves around the World Cup.

Now all eyes are on the World Cup. The TV channels have changed their daily broadcast to offer the most passionate fans the match of the day or the game of their own country. Bookmakers such as SBO are beginning to provide various bets beyond soccer and are starting to present the best odds for the World Cup. In addition, odds can be checked live during the match and if you bet with bonuses, your winnings can increase even further during the World Cup. Newcomers are eligible for guides on how to place their bets.

With the World Cup already started, most soccer fans will dedicate this month to their favorite sport and their most anticipated and exciting matches. That is why between matches, you can always opt for other sport-related offers such as watching shows about soccer or even documentaries; here are some of the most interesting titles to watch while waiting for the next World Cup match.

In the first place, you will find various documentaries about many soccer player stars, with a wide selection. Many football players have decided to open up and talk about their lives inside and outside the pitch. Being a professional player entails a lot of sacrifice and dedication to the sport, a life not everyone can live. These documentaries have opened the eyes of many people who insisted that being a soccer player is easy because it is so full of luxuries. In fact, many of them go through tough times and it is not easy combining their professional and personal careers.

For example, Neymar is one of the protagonists of the autobiographical documentary Neymar: The Perfect Chaos. This documentary is made up of three episodes in which it is narrated how the Brazilian-born player arrived in the European league to become one of the best footballers of this era. But, to relive great soccer stories, there are documentaries on Pelé, one of the best players of all times, or the Argentinean God, as many refer to him, Maradona.

Pelé’s is titled Pelé and tells how he became the football legend he is today so renowned and beloved for, while Maradona’s is called Maradona en Sinaloa and is more like a mini-documentary on his life.

Argentina is one of the favorites to win the FIFA Qatar 2022 World Cup. It is a great team that has already won many trophies and well-deserved recognition in the past. The documentary Sean Eternos: Campeones de América is divided into three episodes and shows the way in which the Argentine National Team won the Copa América in 2021. Another documentary recently added to Netflix’s catalog would be Figo’s Case.

The latest Netflix documentary, showing the dark underbelly of soccer, is the case of Figo. It is a project that shows all that happened behind Figo’s contract for

Real Madrid after he left FC Barcelona. A documentary where the main protagonists of the event and the people around it speak directly and reveal many previously unknown facts to the public.

Actually, all these Netflix soccer documentaries show the bitter, sometimes cruel reality behind soccer. Their main goal is to bring viewers closer to all these great stories and names of soccer for all those who live and breathe this sport. That is why they are recommended because they are worth it. After all, they entertain and further enliven these fans’ passion and love for soccer.