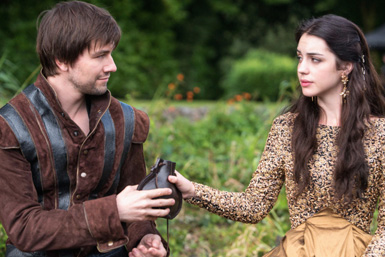 Love is a wondrous state of bliss, and nothing is better than forbidden love.  Classic tales of forbidden love have tantalized audiences for centuries.  In REIGN’s delicious modern tale of the rise of Mary, Queen of Scots, the show has embraced the idea that Mary (Adelaide Kane) may indeed be a “queen of hearts” as well.  It went so far as to create the bastard brother of her fiance, aptly called Bash (Torrance Coombs), who promptly caught Mary’s eye the second she returned from her Scottish convent to the French court.  But due to Mary’s station, her family and country’s expectations, and her own naïve belief that she is actually in love with her betrothed, Mary chose to ignore the her fleeting interest in Bash and focused her attention and desires on her fiancé, Prince Francis (Toby Regbo). END_OF_DOCUMENT_TOKEN_TO_BE_REPLACED