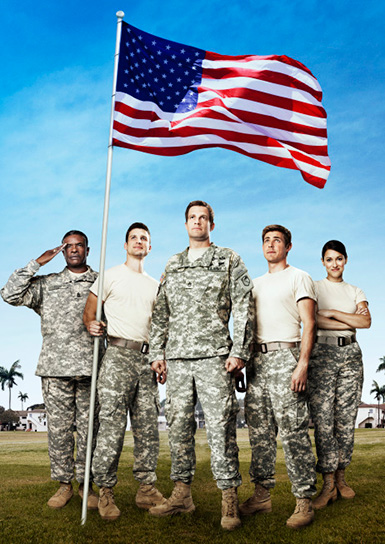 Fox’s new comedy series ENLISTED offers a humorous look at life on a military base, showcasing the misadventures of three brothers stationed together stateside.  With the cool casting Geoff Stults, Chris Lowell and Parker Young as brothers that will do anything to help each other out, ENLISTED shines with humor and heart.  Their goal is to be the best that they can be, to be better soldiers, and to represent their country in the best light possible.  That may lead to more than a few laughs a long the way, but their heart is in the right place and we find ourselves laughing along with them through their hilarious endeavors.

At a recent event at the Paley Center, the cast took a few moments to talk about their fun roles and why audiences are going to fall in love with the show: END_OF_DOCUMENT_TOKEN_TO_BE_REPLACED

On Thursday, ABC will air back-to-back episodes of PRIVATE PRACTICE, the second of which will bring to the forefront Dell, when a terrible explosion at his house lands daughter Betsey and wife Heather in the hospital. And here to talk a little bit about the episode, where Dell has been all season long, and of course VERONICA MARS is Chris Lowell.

Dell has really been pushed to the background this season. Can you talk a little bit about why that happened, and if this Thursday’s episode will mark somewhat of a resurgence for your character?
When Shonda [Rhimes] and I talked about doing less episodes this season [Lowell will reportedly be in 13 of the season’s 22 episodes] the idea behind it was instead of putting Dell in every episode — where a lot of the times he wasn’t doing anything particularly significant to the episode, show, or plot — give Dell less episodes, but make his roles in them more significant. Thursday is a huge episode, I certainly prefer coming to work and having really meaty stuff to do everyday. And from what I understand you’ll be seeing Dell around more and more.