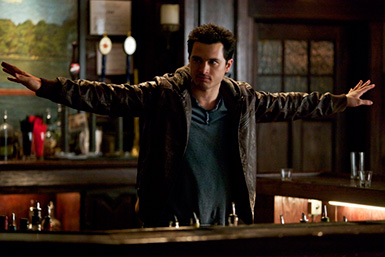 In the meantime, during a recent press conference, star Ian Somerhalder and executive producer Caroline Dries talked about the ramifications of Enzo’s death, his ongoing vendetta, what the disintegration of the Otherside means for our heroes both in our world and in the supernatural beyond. END_OF_DOCUMENT_TOKEN_TO_BE_REPLACED

This just in, new episode photos and previews from the Thursday March 6th episode of THE VAMPIRE DIARIES. Direct from The CW, “FLASHBACKS TO NADIA’S SEARCH FOR KATHERINE — While Nadia (guest star Olga Fonda) remembers her centuries-long search for her mother, Stefan (Paul Wesley), Caroline (Candice Accola) and Matt (Zach Roerig) come up with a desperate new plan to save Elena’s (Nina Dobrev) life. For the second time, Bonnie (Kat Graham) and Jeremy (Steven R. McQueen) must turn to Liv (guest star Penelope Mitchell) for help. Damon baits Tyler (Michael Trevino) into a nasty confrontation, then takes off to seek revenge on Dr. Wes (guest star Rick Cosnett). Caroline and Tyler come to a new understanding. Finally, Bonnie learns of a terrifying secret that will threaten the lives of all her friends. Lance Anderson directed the episode written by Melinda Hsu Taylor.” END_OF_DOCUMENT_TOKEN_TO_BE_REPLACED

This just in, new episode photos and previews from the Thursday February 27th episode of THE VAMPIRE DIARIES. Direct from The CW, “GOOD NEWS, BAD NEWS — As Damon’s (Ian Somerhalder) behavior escalates from destructive to deadly, Stefan (Paul Wesley) begins to regret their last conversation and decides to track Damon down and intervene. For reasons of her own, Elena (Nina Dobrev) volunteers to come along. Dr. Wes (guest star Rick Cosnett) enlists the Travelers to set a trap that will once again test Damon’s friendship with Enzo (guest star Michael Malarkey). After a heart-to-heart talk with Nadia (guest star Olga Fonda), Matt (Zach Roerig) enlists Caroline (Candice Accola) and Tyler’s (Michael Trevino) help to protect Elena, leading to a violent confrontation. Later, when Stefan tries to comfort a dejected Caroline, their conversation leads to a horrifying realization. Michael Allowitz directed the episode written by Brian Young.” END_OF_DOCUMENT_TOKEN_TO_BE_REPLACED

Hitting its milestone 100th episode mark, THE VAMPIRE DIARIES has a lot to celebrate, which they did in fine fashion last November at an exclusive party in Atlanta.  From the red carpet, the cast offered their candid speculations on who they would like to see revisit Mystic Falls, which character death hit them the hardest and maybe a teaser or two about what is upcoming in their epic 100th episode. END_OF_DOCUMENT_TOKEN_TO_BE_REPLACED

This just in, new episode photos and previews from the Monday January 30th episode of THE VAMPIRE DIARIES. Direct from The CW, “SEARCHING FOR THE HIGH ROAD — When Enzo (guest star Michael Malarkey) brings Damon (Ian Somerhalder) a gruesome present and insists that they bond by committing an act of revenge, Damon makes an effort to do the honorable thing. After finding himself in awkward and confusing conversations with Nadia (guest star Olga Fonda), Matt impulsively decides to throw a party, where Caroline (Candice Accola) makes a stunning confession to Elena (Nina Dobrev), then has to face the consequence of her actions with Stefan (Paul Wesley) and Tyler (Michael Trevino). Aaron (guest star Shaun Sipos) does his best to make amends for his family’s past misdeeds and start a new life for himself. Finally, Elena suddenly finds herself in a life-threatening situation with only minutes to figure out how to save herself. Kellie Cyrus directed the episode written by Brett Matthews & Sonny Postiglione.” END_OF_DOCUMENT_TOKEN_TO_BE_REPLACED

While none of the cast or even producers were willing to spoil the fun surprise of which of the killed-off characters would be making an appearance in the 100th episode, everyone sure had a fun time talking about which deaths rocked their worlds and who they wanted to see return on the show – whether for the 100th episode or in some future episode of THE VAMPIRE DIARIES. Here is what each had to say: END_OF_DOCUMENT_TOKEN_TO_BE_REPLACED

Dying to sink your teeth into THE VAMPIRE DIARIES: THE COLLEGE YEARS? Wondering how executive producer Caroline Dries plans on steering the ship now that Julie Plec has her hands full with launching THE ORIGINALS? Curious how long Elena and Damon’s happiness can last amidst a College filled with surprises, secrets and sexy professors lurking around every corner? Well, wonder no more, because theTVaddict.com recently had the pleasure of shooting a San Diego Comic Con interview with newly appointed TVD head honcho Caroline Dries. See what she had to say about the upcoming fifth season for yourself, after the jump. END_OF_DOCUMENT_TOKEN_TO_BE_REPLACED

Memo to Showrunner Shonda Rhimes: Watch your back! Because this fall, a new name is thisclose to usurping your crown as “Hollywood’s Hardest Worker.” Meet Julie Plec! Responsible for spearheading three hit (or soon-to-be hit) CW shows this fall (THE VAMPIRE DIARIES, THE ORIGINALS and THE TOMORROW PEOPLE), we think it goes without saying that Plec has quite the gargantuan task ahead of her. So, how exactly does she plan on keeping all three balls in the air while managing to maintain the storytelling success that has been the hallmark of the past few seasons of the mother ship (Read: TVD)? See for yourself, after the jump. END_OF_DOCUMENT_TOKEN_TO_BE_REPLACED 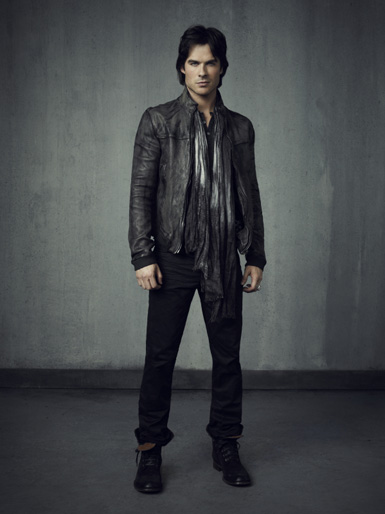 Couldn’t make it to sunny San Diego for the annual pop culture confab that is Comic Con? Never fear… theTVaddict.com is here. Here that is with some fantastic video interviews courtesy of our West Coast Correspondents Tiffany Vogt, Jennifer Schadel, Genevieve Collins, and Sarah Stephens. All of whom risked life and limb to get you up close and personal with your favorite [or soon-to-be favorite] television talent. Case in point, this just shot interview with one of the stars of THE VAMPIRE DIARIES. Or to be more specific, Ian Somerhalder, who dishes on “Delena,” the hardships ahead and season five’s darker and more dramatic tone. END_OF_DOCUMENT_TOKEN_TO_BE_REPLACED