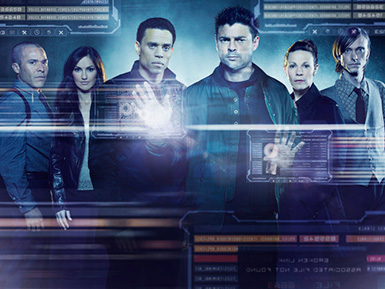 One of the hottest new sci-fi shows coming to television this Fall is Fox’s new series ALMOST HUMAN. Set 35 years into the future, robots and androids have become an integral part of everyday life; so much so, that many are paired with police officers in street patrols and to respond to criminal complaints.  ALMOST HUMAN introduces viewers to John Kennex (Karl Urban), a police officer injured in the line of duty, who comes back from his convalescence to find himself paired with an unusual android, Dorian (Michael Ealy). The show seeks to explore themes of what it means to be human and how working together can benefit both humans and droids.  The series is an unexpectedly touching and humorous look at life in the future, which also hides a darker side just as treacherous and volatile as the world we live in today. In a exclusive interview at last summer’s Television Critic’s Association Fox party, creator and executive producer J.H. (Joel) Wyman talked about what inspired the series and the fantastic casting for its key characters. END_OF_DOCUMENT_TOKEN_TO_BE_REPLACED