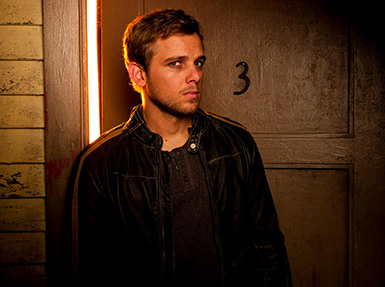 There was always something a little off and unexplained about the relationship of Norma (Vera Farmiga) and her eldest son, Dylan (Max Thieriot). She seemed so uncomfortable around him and like she could not bear the sight of him most days. So finding out that Dylan was likely the product of Norma’s brother Caleb (Kenny Johnson) forcing himself on her finally shed light on a very painful secret Norma has been hiding and running from for a very long time.

In a recent press conference call, stars Max Thieriot and Kenny Johnson talked about their complicated and damaged characters and the dark path that they seem to be caught up on as they get deeper and deeper into Norma and Norman’s lives. END_OF_DOCUMENT_TOKEN_TO_BE_REPLACED

When we last visited BATES MOTEL at the end of Season 1, it ended with the brutal murder of Ms. Watson (Keegan Connor Tracy). Season 2 picks up right afterwards as Norman (Freddie Highmore) and his mother Norma (Vera Farmiga) find out about her death, and their subsequent fears about who may ultimately be responsible. Norma has that uneasy feeling that her son may somehow be involved and yet wants to believe him incapable of that kind of violence – again. It was one thing for Norman to have killed his own father in a fugue state, but what could have compelled Norman to kill one of his favorite teachers? It seems unfathomable.

Fortunately, as the mystery surrounding Ms. Watson’s death unfolds, more than one suspect emerges when it is discovered that Ms. Watson had a private life that may have exposed her to greater danger than one would think for a mere high school teacher.

Then in Dylan’s (Max Thieriot) seemingly unconnected world of the underground marijuana industry in White Pine Bay, there is a power shift afoot that makes things a lot more uncertain and risky for him as well. Two new vying power brokers make a play for control of the weed industry and Dylan seems caught-up in the crosshairs.

As if murder, rampant crime and a rising drug industry were not enough to preoccupy the entire Bates family, a few other surprises arrive on their doorstep. There are new love interests for everyone. In fact, love is in the air.

Season 2 maybe about the heightened danger swirling all around, but it also about the need for human connection and the craving to be a part of a family. While people seem to sense that something is not entirely right with Norma and Norman, they cannot help but be drawn into their world; for there is an innate seductiveness about them that draws them in. For example, Emma and Sheriff Romero know all to well that it is wiser to keep the Bates at arms’ length, but the illusion of normalcy and love that Norma and Norman exude brings them closer. Like leaning in to feel the heat of a flame – it feels warm and inviting, until you get to close and get burned. Even Dylan seems in denial about the oddity of his own family.

At last week’s premiere event, the cast took a few minutes to preview what Season 2 holds for their characters: END_OF_DOCUMENT_TOKEN_TO_BE_REPLACED