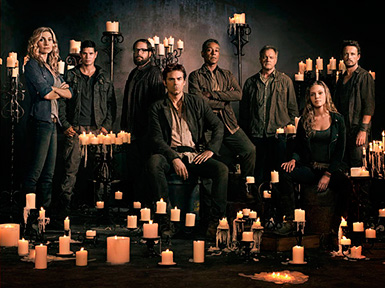 Last week’s episode of REVOLUTION ended with a whopper reveal, Aaron Pittman (Zak Orth) awoke to find himself in a world where power and electricity still exist. He awoke March 5th in 2014. It was as if the blackout and the subsequent 15 years of darkness had never occurred. So what exactly has happened? Was the blackout all a dream, or has Aaron found himself in a dream-world run by the nanites? And if so, how does he escape from it?

In a fun-filled, mind-bending episode REVOLUTION looks at the lives of who are heroes would be if the the blackout had not occurred. It is an interesting look at who everyone could be in a world where electricity still existed and those intervening 15 years of hell-on-Earth had never happened.

The following is an interview with co-star Mat Vairo and a clip from the press interview with Elizabeth Mitchell as they talk about the after-effects from last week’s episode of REVOLUTION: END_OF_DOCUMENT_TOKEN_TO_BE_REPLACED

In anticipation of REVOLUTION’s February 26th return to NBC, theTVaddict.com is spending the day on the set. But before we can spill all the secret and scoop we gleaned from stars Billy Burke, Tracy Spiridakos, Elizabeth Mitchell, David Lyons, JD Pardo and Mat Vairo, we thought you might enjoy some cute candids. Enjoy. END_OF_DOCUMENT_TOKEN_TO_BE_REPLACED