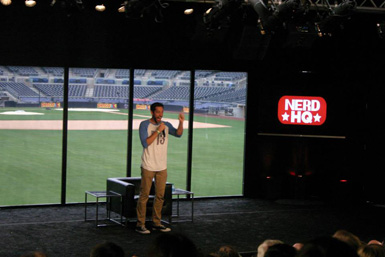 Considered the con within the con, Nerd HQ returned for its 3rd annual event coinciding with San Diego Comic-Con July 18th through July 21st.  With a star-studded array of panels for its “Conversations for a Cause” series, there were panels featuring the likes of Joss Whedon, Nathan Fillion, Zac Levi, the SUPERNATURAL boys Jared Padalecki and Jensen Ackles, the cast of HAVEN, Tom Hiddleston, Evangeline Lilly, the cast of “Kick-Ass 2”, and more.  Created by former CHUCK star Zac Levi along with some well-chosen friends and great sponsors, Nerd HQ has become one of the most desirable events alongside the epic San Diego Comic-Con itself. END_OF_DOCUMENT_TOKEN_TO_BE_REPLACED 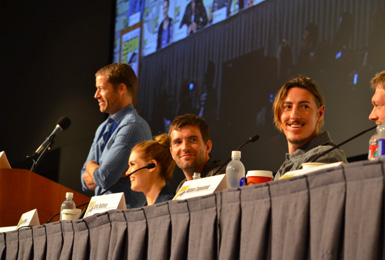 It was a monumental year for HAVEN as it made its first panel appearance at San Diego Comic-Con.  HAVEN not only hosted a fan party in honor of the occasion, they held their 1st panel at SDCC, then rushed over for a 2nd panel at The Nerd Machine’s Nerd HQ — and managed to squish in time for fan scavenger hunt along the way.  Everywhere you turned for the first couple of days at SDCC there was a HAVEN event to be had.  Fans of the show and newcomers were delighted with the large presence at San Diego Comic-Con and made sure that each appearance was a sold-out, jam-packed, and bursting at the seams event. END_OF_DOCUMENT_TOKEN_TO_BE_REPLACED