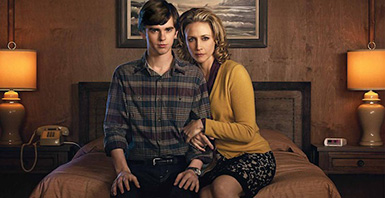 The first season of BATES MOTEL introduced viewers to the double-layered world of Norman (Freddie Highmore) and Norma Bates (Vera Farmiga). On the surface it looked normal, but just below the surface was a layer of uncertainty and insanity. The mother-son duo, to the casual eye, were all normal and just fine. But as we got to know them better, they were not quite as normal as they appeared. Something was off. Their perspective warped by their life experiences and perhaps a few genetic proclivities as well. Fighting the non-normal impulses, Norma was the more self-aware of the two; but with each episode viewers fell under the self-delusional spell of Normal and Norman. Seeing the world through their eyes heightened the prevailing sense of fear, paranoia and irrational belief of love when perhaps none was truly there.

A spasm of reality crept in in the Season 1 finale with the murder of Ms. Watson (Keegan Connor Tracy), leaving both Norman and Norma to wonder if Norman was capable of killing again, albeit in a fugue state so that he could not remember it.