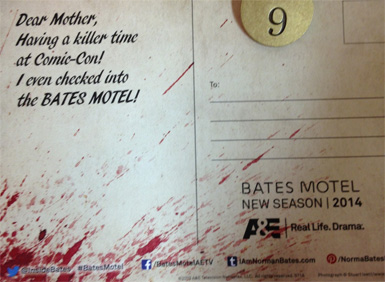 One must never turn down an invitation to stay at the Bates Motel, and especially when invited to be special guests of Norma and Norman Bates.  Making its first party debut at San Diego Comic-Con, BATES MOTEL spared no expense in recreating some of its iconic imagery using authentic set pieces to decorate for its party.  Coming off an incredibly successful and riveting first season, the series is celebrating not only its second season renewal, but also the Emmy nomination secured for its star Vera Farmiga.  So the entire cast brought their dancing shoes and were ready to party with fans, friends and press in an exclusive 3-tiered party in the Gaslamp District of San Diego.  With a room featuring its own mock “weed” farm with an abundance of home-made brownies on hand and a wall showcasing the loving Bates family and a few of Norman’s taxidermy projects on display and well-chosen beverages to accentuate the night, the party started off on a high note and only continued to ramp up as the night went on. END_OF_DOCUMENT_TOKEN_TO_BE_REPLACED