In their darkest hour, will a hero emerge?  If so, it is a long time coming for the SAMCRO club.  Tara (Maggie Siff) and Clay (Ron Perlman) are in jail, both uncertain they can face the daily rigors of incarcerated life.  Jax (Charlie Hunnam) and his crew have step into more trouble than they ever anticipate with their attempts to go legit and sever ties with the seedier aspects of their business ventures. And Otto (Kurt Sutter) continues to pay severely for his murder of Lee Toric’s (Donal Logue) sister last season.  Lee’s vengeance knows no bounds and even a jail cell will not protect either Tara or Otto.  Lee wants to destroy SAMCRO and everyone with ties to it — and it looks like he just might, even if he has to kill each one himself along the way. END_OF_DOCUMENT_TOKEN_TO_BE_REPLACED 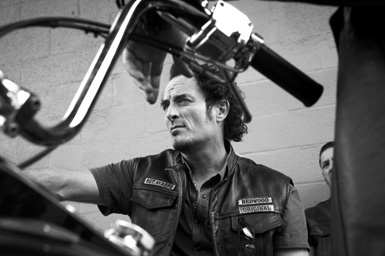 During last week’s fantastic fourth season premiere of SONS OF ANARCHY, the Sons were released from prison only to return home to a very different Charming, CA from the one they left. So just what’s in store for the them during the rest of the season? While in town to promote the premiere of his very-well received film “Goon” at this year’s Toronto International Film Festival, theTVaddict.com’s special correspondent Melissa Girimonte had the chance to chat with Kim Coates, the man behind Alex “Tig” Trager, who shared a bit of the dark truth about this season’s storyline, some insight into his complex character on the series and more.

SONS OF ANARCHY is usually a slow build each season, but the Season 4 premiere was very intense with a major twist at the end. What were your thoughts on that script when you first read it?
Kim Coates: I think that part of Kurt Sutter’s genius is his storytelling. Obviously he’s an amazing writer, but his storytelling is like no other we’ve been around. Ron Pearlman [Clay Morrow], my good buddy, says it as well. We think that Kurt’s storytelling is just shocking and so surprising. You’re expecting something and you get something else. This whole Russian element that we had last year at the end of Season 3, we thought that at the beginning of this year — even though we’d been in prison for 14 – 15 months — that we would have to sort out the Russian thing and get back in bed with [them]. It doesn’t end up like that. It does something completely different, and without giving too much away, the first 10 minutes and the last 10 minutes rocked my world. I thought it was the most brilliant ending to the first show of [a season] that I’d ever seen. END_OF_DOCUMENT_TOKEN_TO_BE_REPLACED