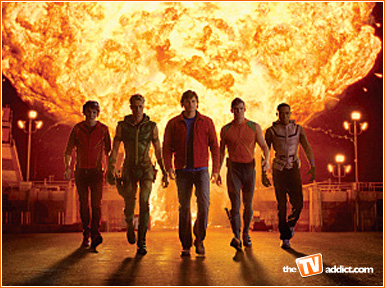 “This isn’t the end of the story Clark, this is just the beginning…” said Green Arrow (aka Oliver Queen) to Clark Kent in the final minutes of last night’s much anticipated episode of SMALLVILLE.

So what exactly is this the beginning of? While a JUSTICE LEAGUE spin-off has been rumored for years, the new CW [formerly the WB] has never expressed that much interest in the idea (much to the chagrin of comic book geeks everywhere). After-all, thanks to the success of AMERICA’S NEXT TOP MODEL, GILMORE GIRLS and VERONICA MARS, it’s pretty clear that the CW’s target demographic is young woman.

But wait… enter NBC with HEROES — A group of ordinary people with extraordinary ‘super-powers’. HEROES is an immediate smash, attracting a young audience and tons of critical acclaim. Within a mere few months, NBC has stolen the super-hero crown from the CW by essentially creating their own version of the ‘Justice League.’ (Oh wait, I forgot, Tim Kring’s never picked up a comic book in his life!)

So here we go, a prediction from the TV addict if I may be so bold. Fall 2007 — the ultimate battle for super-hero supremacy. HEROES vs. THE JUSTICE LEAGUE, or is it SMALLVILLE: JLA? TEAM QUEEN? JLA? Or simply JUSTICE LEAGUE… the title’s not important. But just remember, you heard it here first! Come September, there’s going to be quite a few more super-heroes on your TV set. Sylar, you’ve been warned.