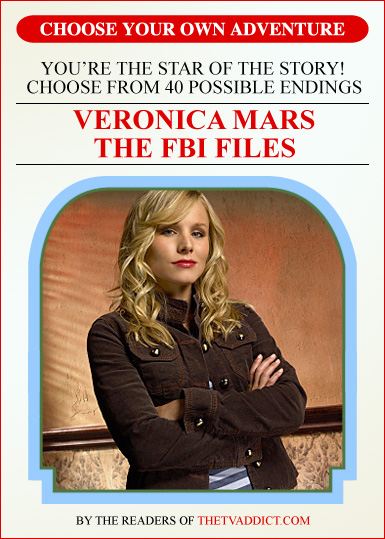 With Rob Thomas working hard to convince the powers that be to give VERONICA MARS a fourth season, we at theTVaddict.com thought it only appropriate to lend Rob a hand. After-all, the MARS mastermind has worked tirelessly for three seasons to give us one of the best female protagonists on television. Does he not deserve a break?

So here’s the idea. Remember those ‘Choose Your Own Adventure’ books from your childhood? (I know, ‘books’ I’m a TV addict! What are books?) We’re going to create our own ‘Veronica Adventure’ for season four.

Scene 1: The camera zooms in on a gorgeous Veronica, dressed in full cap and gown accepting her diploma. Putting three years of college, a year at FBI training and counltess solved mysteries behind her, Ms. Mars is now trained and ready to become a full-fledged FBI agent. Camera pans to the audience as Keith, Logan, Wallace, and Weevil are happily applauding.

Scene 2: Veronica heads off to her first day at FBI headquarters in Washington D.C. (Veronica working in our nation’s capital allows for some fantastic story-lines and undercover opportunities). Imagine Veronica: the young naive Senate page trying investigating a Capitol hill sex scandal! The adorable blonde White House intern trying to uncover an information leak! An intrepid reporter trying to break a story! Well, you get the idea. Pretty much the possibilities are endless as no one does undercover better than Veronica Mars (With Mac playing Chloe to Mars’ Jack Bauer).

Scene 3:Veronica quickly discovers that the real-world FBI isn’t so different then high school — full of cliques, back-stabbing and political maneuvering. Luckily, Veronica is thrilled to discover her mentor is none other than Lucy Lawless (The FBI agent from season two’s Duncan disappears story-line*).

Scene 4: A supportive boss, Mac at her side, everything looks great. But this my friends is VERONICA MARS, where nothing is as easy as it seems. The first bit of our adventure begins and now it’s time for YOU TO DECIDE which characters are part of Veronica’s team.

Is it the nerdy ‘always playing it by the book’ FBI agent who will be on Veronica’s back the entire season ensuring she plays by the rules? Or the hot blond nemesis (think: Madison Sinclair) who loves to stir up trouble? Or the ‘love interest’ for Veronica who starts off as a shallow handsome himbo but evolves into Veronica’s new soul mate?

Scene 5: Veronica’s first crime scene. As Veronica steps across the yellow police tape [dramatic pause] she’s shocked to discover that someone close to her has been murdered! YOU DECIDE who’s been killed. This TV Addict’s two cents: The murder victim has to be either Keith, Logan, or Wallace. We all know from past seasons that VERONICA MARS works best when Veronica (and the audience) is emotionally invested in the case (did anyone care about the murder of Dean O’Dell?). The murder of Logan, Keith, or Wallace will certainly resonate with both the audience and Veronica.

What happens next? Who’s killed? What’s the motive? You decide! Post away in the comments below. And Mr. Thomas, no need to thank us, we’ll settle for an executive producer credit.

*Thanks to reader Tim G for the idea!