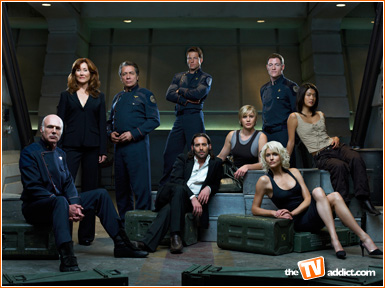 Needless to say, if you have yet to watch tonight’s season finale of BATTLESTAR GALACTICA, stop reading now, as the following contains spoilers.

If there’s one thing you can count on BATTLESTAR GALACTICA to deliver, it’s a fantastic season finale and true to form, tonight’s finale did not disappoint. Forget the return of Starbuck (more thoughts on that later), which I saw coming the second Lee Adama jumped into his Viper (loved how he grabbed his uniform as if he was putting on his batsuit!). The reason the finale left my jaw on the floor is that we actually saw Earth. We don’t have to simply take Starbuck for her word. She told Lee, “I’ve been to earth, I know where it is and I’m going to take us there.” The producers made a conscience decision to show us the planet. Earth exists! I can now sleep soundly knowing that all the hardship, death and and eye loss will be worth it in the end. Our intrepid travelers will reach earth, eventually.

In terms of that ‘other mystery’, you know, the one where there might be a cylon (or four!) on Galactica. I was quite surprised as to how it was handled. I honestly expected Colonel Tigh (never one to shy away from violence) to pull out a gun and shoot everyone in the room, including himself — with the final shot of the season panning down on a Cylon ‘regeneration bath’ as one of either Tyrol, Anders, Tigh or Tori was reborn as a Cylon. The implication that there’s not just one, but four Cylons on Galactica is stunning. I can’t wait to see how it plays out next season.

Finally, the most boring (or predictable) aspect of the finale, was the trial of Baltar (or as I’ve cleverly dubbed it, GALACTICA & ORDER). While Baltar being found not-guilty came as no surprise, I did find the way in which he was acquitted quite clever. Lee Adama’s impassioned speech with regards to the state of the fleet really made sense. Everyone in the fleet, from the President on down has seriously fracked up yet been worthy of a second chance. Why is Baltar the only citizen not to receive one? Serious kudos to the Galactica writers for finding a legitimate reason to find Baltar not-guilty. I really was wondering how they would pull that off — and they did so successfully.

Some final questions for the audience if I may….

1. Is Starbuck really alive or just a figment of Lee’s imagination (in the same way in which Six is in Baltar’s head)

2. What version of ‘All Along the Watchtower’ played over the final scene? Did you find the introduction of modern music a distraction? Do we believe it was a consciense decision by the writers considering they’ve never had modern day music in the show before?

3. What’s the deal with the Roslin/Six/Athena Opera House story-line? Honestly, I have no idea what that’s about. Somebody please explain!

4. Who’s the cylon? Tori, Tigh, Anders and/or Tyrol? (Or as some have speculated, are they all Cylons?) Update: In an interview today with Entertainment Weekly, it’s confirmed that all four are officially Cylons.

5. Remember back to the opening credits that usually play at the beginning of each episode. “They [the cylons] have a plan…” What exactly is their plan?