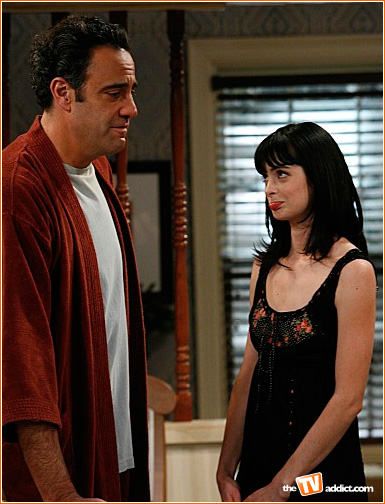 Jenny recently had the opportunity to ask Krysten Ritter some pressing questions! Find out if she’ll be back on 2 fan favorites as Gia from Veronica Mars and Lucy from Gilmore Girls, when she’ll be on ‘Til Death as Allison, the snarky, dark college daughter of Eddie and Joy, and what she has planned for the future!

Jenny: What are you currently working on?

Krysten Ritter: I just shot the season finale of ‘Til Death and today I started on a pilot called The Rich Inner Life of Penelope Cloud for CBS, starring Marisa Tomei. The writer (Jeff Greenstein) is someone I met 2 years ago (on another pilot that was not picked up) so I am thrilled to be working with him. 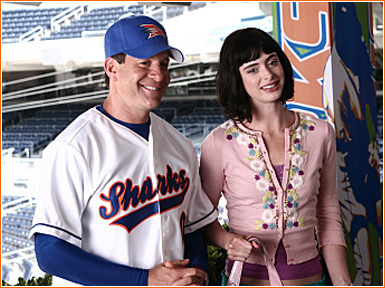 Jenny: A lot of our readers will know you as Gia Goodman from Veronica Mars last season. How was working with that cast?

Krysten: Lovely. This was my first major recurring role on a series – so my first time really experiencing an on-going, long lasting job where you really get to know everyone and form a little family etc. I really enjoyed Ryan and Kristen (who I worked with the most) and made great friends. This was a fabulous set environment and I couldn’t have asked for a better first TV experience, I miss it. I tried to absorb as much information as I possibly could. I found myself really paying attention to everything that was going on – even behind the camera. The way things were shot, lit, and all of that. The knowledge I gathered while filming Veronica Mars definitely informed other projects of mine that I’ve been producing and playing around with.

Jenny: It seemed like people either really liked the character Gia or really didn’t like her. Did you get a lot of that reaction in person or was it mainly positive?

Krysten: Oh, well, jeez. Really? In person everyone was (and is) really nice to me about Gia. I’ll get stopped on the street or whatever and people go on and on how they loved Gia. But I guess, what else would they say to my face!? LOL Seriously, it was such a fun character to play and as an actor you just can’t allow yourself to be affected by other people’s opinion of you or your character. That’s not what it’s about. You know what I mean? 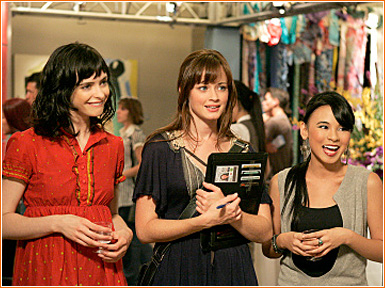 Jenny: What was your favorite episode of Gilmore Girls that you were in and why?

Krysten: My favorite episode was the one with the Indian restaurant where the truth came out about Marty and Rory’s friendship. I certainly had my work cut out for me in that scene; with pages and pages of dialogue. It was fun for me because it was such a dynamic scene and I had so much to do…

Jenny: Any word on you being back on Gilmore Girls or Veronica Mars and if so, any idea when?

Krysten: Gilmore Girls, yes. Veronica Mars, nothing in the books, but I guess you never know!

Jenny: We are going to see you again soon on ‘Til Death, with the hilarious Joely Fisher and Brad Garrett. Do you know how many episodes of ‘Til Death you will be in and what else is coming up for your character?

Krysten: I just shot my 4th episode and if the show goes another year…well, I don’t think I’ll be going anywhere because I’m the daughter!!!! Also they don’t really kill people off in sitcoms. LOL. No, seriously though –– I hope the show goes another year (at least) and you will be seeing a lot more of me. They’ve set me up to be kind of a problem child. Not in a bad way, but my character is very free spirited and sarcastic and dark; a lot like Brad Garret’s character. Tune in!

Jenny: Who was the funniest person to work with on any of the shows? And on set, are you known as the prankster or the quiet one?

Krysten: Brad and Joely are the funniest people I’ve worked with. Which is probably why they are the stars of a sitcom! Ryan Hansen is pretty hysterical too. Me? It depends on what kind of work I’m doing. I do a lot of comedy so yes, I guess when in that environment I would be more on the “prankster” side… But even so, I’m more of an observer and I’m a little shy at first. But when I’m doing drama or an emotional scene you won’t hear a peep out of me.

Jenny: You’ve been in several movies, including Slingshot in 2005 and Margaret being one of the latest. How does working in television compare with working in the movies?

Krysten: It’s pretty similar except that in TV the pace is a bit quicker. You shoot more pages in a day, it airs usually anywhere between 1 and 3 months later… But in film you shoot a page and a half a day and a film is released a year or more after you wrap. Also the auditioning processes, although both grueling, are very different. With TV, you audition, test and find out right away. But for films you might have to audition 8 times and over a longer period of time. Just a little inside scoop for ya.

Jenny: You’ve been a model, acted in tv and movies, have been on stage and you are in a band called ex vivian, in which you sing and play guitar, as well. Which is your favorite?

Krysten: Acting is my favorite. But even with that said, I have a lot of interests in life and like to express myself in a million different ways. I’m incredibly lucky to be able to do any of it. I act, I write, play music; I do a lot of stuff.

Jenny: You grew up on a farm in Pennsylvania. How did that affect you in helping shape your modeling, music and acting careers?

Krysten: I don’t really know how to answer that. Hmmm. I don’t feel like being from a farm “shaped” my career per say… I get a lot of “wow you’re from a farm!?” You don’t meet a whole lot of people in the biz with a background like mine. At least, I don’t. So I do think that makes me different? And I certainly have my feet on the ground and my head on straight because of it. Life on a farm is very basic and very humble. I feel so fortunate to have ever been scouted in the first place. That’s not something that happens every day and I know that.

Jenny: You live in New York City and near LA currently, if I read right. Which do you like more? Country life or city life and why?

Krysten: I split my time between NY and LA. But I call New York home. You know, it’s a toss up for me. I’m more of a city girl, but I love the outdoors as well (which is one great thing about LA). I love hiking and I love the beach. But I also love the seasons and obviously there are none in LA. There is definitely a part of me who wants to be in the country and have a farm of my own at some point. Horses, the whole 9. But not anytime soon.

Jenny: As you know, this interview will be posted on TheTVAddict.com. Are YOU a tv addict? What are YOUR favorite tv shows?

Krysten: Yeppers! 30 Rock, Dexter, The Office, Six Feet Under, Curb [Your Enthusiasm], Entourage, Sopranos (please don’t end!!!), Big Love, DEXTER DEXTER DEXTER. I’ve gotten into American Idol this year a little bit. It’s always on so it’s kind of hard NOT to, but I’m finding it ever so entertaining. I’ve also been tuning in to Dirt on FX.

Jenny: In all your free time (Hah!) are you dating anyone right now and if so, would we know him from anywhere?

Krysten: I have a wonderful boyfriend whom I adore. He’s a musician. No actors for me!

Jenny: Last question, I promise! What is the one question you have always wanted to be asked in interviews but never were?

Look for Krysten on the April 4th episode of ‘Til Death, when Joy goes to spend Spring Break with their daughter and they end up fighting over a hot environmentalist after he charms them into joining his Beach, and Eddie gets lonely without Joy at home, so he crashes a special evening between Jeff and Steph. You can learn more about Krysten on her MySpace page as well!