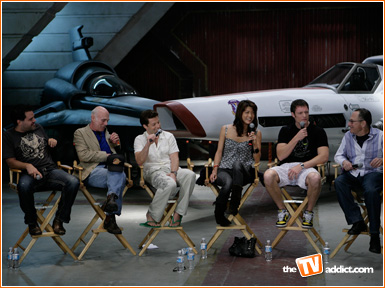 At yesterday’s SCI FI Digital Press panel, BATTLESTAR GALACTICA fan favorite Aaron Douglas surprised the audience by revealing that he knew months prior that his character — fan favorite Chief Tyrol — was indeed one of the final five Cylons.”I found out months in advance, accidently,” divulged Douglas. ” I found a piece of paper lying around that I was not supposed to see.”Of course, when you’re one of twenty-five intrepid reporters desperate for any morsel of scoop with regards to the upcoming fourth season of GALACTICA, the phrase, ‘things we’re not supposed to see’ popped up far too often for our liking. Yet that didn’t stop this TV Addict from gathering as much intel as possible in an effort to uncover any info about the highly anticipated final season.First bit of scoop, episode four or five’s title is “Into the West.” Turns out Aaron Douglas isn’t the only person to see ‘interesting’ pieces of paper lying around the set. In fact, one couldn’t help but notice entire scripts lying inconspicuously around the gritty and cramped Galactica corridors. But rest assured SCI FI executives — not wanting to risk being ejected from the nearest air lock — this TV Addict didn’t dare pick it up. No matter how curious he was to discover what the episode’s title, “Into the West” really meant. 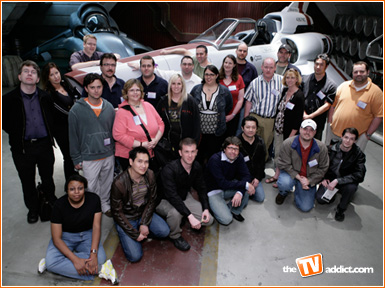 Another piece of intel one couldn’t help but notice was the name of the new ship currently being constructed for episodes five or six. Perhaps a more fanatical BATTLESTAR GALACTICA fan can let this TV Addict know if the ship name ‘Demitrius’ has any relevance?And finally, the massive bullet holes that riddled the Cylon Base Ship were pretty hard to miss. While brilliant tour guides Richard Hudolin (Production Designer) and Doug McLean (Art Director) were tight-lipped on what happened, one can only assume that episode four will include one helluva an angry Cylon. Or, dare we say, a human who isn’t pleased to have recently discovered that he may not be so human after-all. 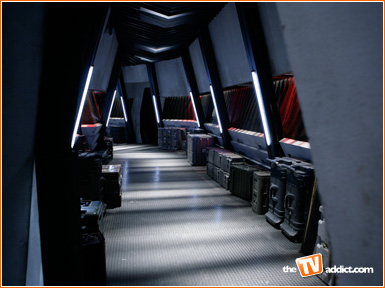 Be sure to check back throughout the week for more scoop on the TV Addict’s SCI FI adventure. Including great video, photos and more.