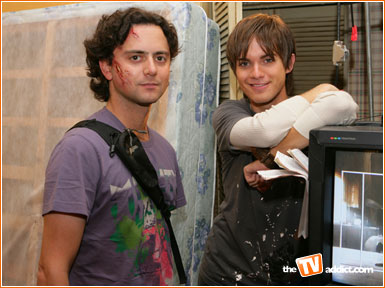 Remember Stars Hollow? That quaint fictional Connecticut town that audiences [and this TV Addict] fell in love with for seven years on THE GILMORE GIRLS. Well folks, Lorelai, Rory and all of their quirky neighbors have packed up and fled in an effort to avoid the violence-prone new kids on the block.

Which makes sense, because where Sarah Connor and her son, John go, trouble follows. And by trouble we of course mean people die and things blow up. And come January 2008, that’s exactly what will be happening as FOX gives action junkies a weekly dose of adrenaline via TERMINATOR: THE SARAH CONNOR CHRONICLES. A new series which chronicles the exploits of your every day single mom as she searches for love, pays her taxes and keeps her son safe from the everyday pitfalls of youth. You know, the regular teenage troubles, like protecting your son from killing machines that have been sent from the future.

That’s right, she’s that Sarah Connor. From the beloved TERMINATOR films. And she’s taken over Luke and Lorelai’s old stomping grounds, which is where I recently had the chance to catch up with the stars and creators of what may be the biggest show of 2008.

But before I go into more detail about the run-down house that the Connor family has chosen to hide out in, let me first talk about my scar. You may have noticed that I ended my day on the set of THE SARAH CONNOR CHRONICLES a little worse for wear. And no, as speculated on TMZ.com, I did not get into a fist fight with Charlie Sheen [who’s comedy TWO AND A HALF MEN shoots right next door]. 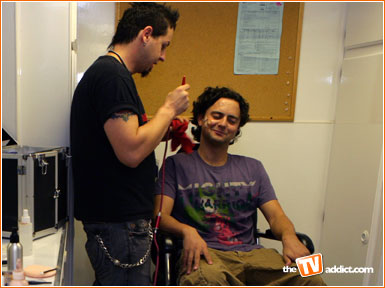 My scar is the work of brilliant makeup artist Rob Hall. Myself, along with fellow reporter Randy Jennings [thearnoldfans.com] were lucky enough to be transformed into ‘Terminators’ for the duration of our tour. For forty-five minutes I sat in the make-up chair as Hall regaled us with stories of what it was like working on such hit shows as FIREFLY, ANGEL, BUFFY, THE SHIELD and more recently VACANCY, SUPERBAD and BONES. Even more impressive was the fact that Hall arrived in Los Angeles at the age of 19 with a mere $80 in his pocket and a dream. Cut to twenty years later, he’s now one of the most sought after special effects makeup artists in Hollywood.

Following my transformation, we entered the Connor’s new home. It was dark, dusty and rundown. Or as show creator and Executive Producer Josh Friedman put it, “the ideal unassuming hideout for Sarah and John [Connor].” 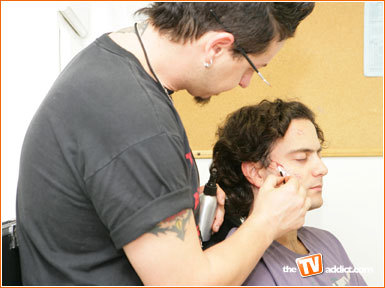 We were led into a small room adjacent to the kitchen. Waiting for us was the young man who’s responsible for saving all of mankind — John Conner, played by Thomas Dekker. Not surprisingly — considering at nineteen he’s starring in what’s undoubtedly going be a mega hit for FOX — Dekker was in a great mood and was more than happy to take the time to chat about what it’s like to take on such an iconic character.

Dekker, who had to audition for the role nine times before he got the job started off by talking about his love of the TERMINATOR movies explaining that, “I’ve always liked the films. I’m not really so much of an action guy but I really love the Terminator movies. I’m very picky about choosing roles things, but Terminator 1 and 2 were definately two movies I could watch over and over again.”

Evidently Dekker had been getting his media-speak training directly from showrunner Josh Friedman. Whom we quickly learned is almost as hardcore about spoilers getting out as self-proclaimed ‘Spoiler Nazi’ herself Shonda Rhimes [GREY’S ANATOMY].

Over lunch, Friedman explained half-jokingly [we think] how back in the spring, he thought he’d be able to keep the fact that [spoiler alert] Summer Glau was a Terminator under wraps until the show premiered in January. Not surprisingly, savvy fans quickly connected the dots [Summer Glau = Kick Ass Robot]. Since then, Freidman’s accepted the fact that some plot points are bound to get out. Although as of this date, the show’s done a surprisingly good job of keeping the rest of the series under wraps. 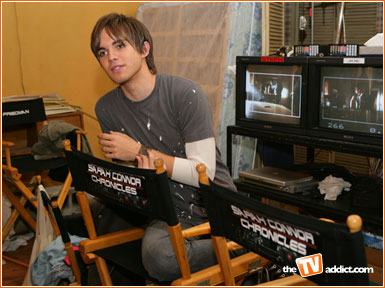 In addition, if you’ve seen the pilot and were impressed by the on-screen chemistry between Dekker and co-star Summer Glau, don’t hold your breath. Apparently, Cameron isn’t that type of robot. “In the first episode, you can tell that John really likes her, “but when he finds out the truth, it’s a bummer. ” elaborates the good natured Dekker, “I mean it sucks you know, when you like a girl and you find out she’s a robot.”

We couldn’t have said it better ourselves.

Stay Tuned for Part II of theTVaddict.com’s visit to the set of the SARAH CONNOR CHRONICLES where we talk about lunch with the show’s creators, our photo op with Summer Glau [my robot girlfriend] and getting to meet BATTLESTAR GALACTICA and now SARAH CONNOR music composer Bear McCreary.