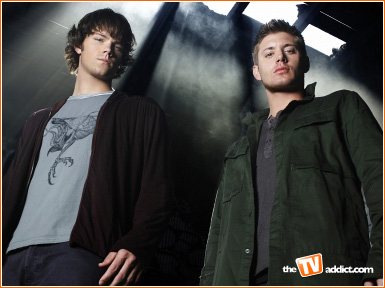 I have a major hate-on for SUPERNATURAL. I don’t dislike or feel ambiguous toward the show, but feel pure, unadulterated hate.

Now I know that for some of you, them’s fightin’ words. Mention SUPERNATURAL and many of you — our host, the TV Addict himself — go weak in the knees and look for new superlatives with which to sing its praises, all of which leaves me saying… “seriously?”

For the record, nobody was more stoked for the launch of this show than I, a lover of just about all things horror. Yes, I’m the guy who can be found sitting in the corner of a dark bar making a case for the argument that the second Nightmare On Elm Street flick — Freddy’s Revenge — should not be considered a true sequel in much the same way that Season of the Witch (which is completely free of Michael Meyers) should not be considered a true Halloween flick. And every month, I run to the mailbox to get the latest novels from my horror book of the month club (featuring such authors as Richard Laymon, Edward Lee and Douglas Clegg).

So when the WB announced a series which they promised would offer weekly thrills and chills, I was there with bells on. At the very least, I hoped for something BUFFY-esque, combining witty scripts with great writing. This being television, I suspected the promised chills would most likely be, at most, shivers.

But the series failed to deliver even those. Worse, the scripts tried to pass off cliched dialogue as witty banter, and the special effects were… um, let’s be kind and call them on par with CHARMED.

Worse, Jensen Ackles idea of acting seemed to involve speaking in a voice that sounded kind of like a little boy imitating a grown man. Or maybe Keith Olbermann imitating Bill O’Reilly. And while Jared Padalecki has never been the greatest of actors, he seemed more bearable as a second banana on GILMORE GIRLS (where he played Rory’s first love, Dean) than as a lead here.

But the biggest sin was, for me, the complete lack of actual scares. While I dug the idea that each week the show would sort of recreate a ghost story/urban legend that we were familiar with, the format actually resulted in predictable tales and a lack of suspense.

At that point, I stopped tuning in regularly and instead became an occasional viewer, so forgive me if some of what I’m about to say is inaccurate. I have no doubt I’ll be corrected by the Winchester brothers’ legions of fans. That said, one thing I can not stand is when a show introduces an overall arc (which this one had from the beginning as the boys sought to figure out the truth about the death of their fricasseed mom) and yet feels as if it’s making things up as it goes along. At some point during season two, it was established that several other women had died in exactly the same manner as the late Mrs. Winchester, with the women literally burning out when their children were six months old. And yet in the very first episode, it was seeing his girlfriend turn into a ball of flames which convinced Sam to join Dean on their demon quest. Unfortunately, Sam’s girlfriend did not have a six month old child, meaning that the season two revelation was not thought through for continuity.

Worse, when it came time to expand the cast in season three, they introduced an oh-so-original character named Bela who fulfilled practically every missing clichen in the book: She’s exotic (“She has an accent! Ohhh!”), amoral (“She’s bad… but does good things!”) and fulfills the need for a love/hate relationship (Will Dean sleep with her kill the malicious minx?).

And maybe what I hate most of all is just not “getting” what it is that makes so many people go gaga for something that in my never-exactly-humble opinion is average at best.