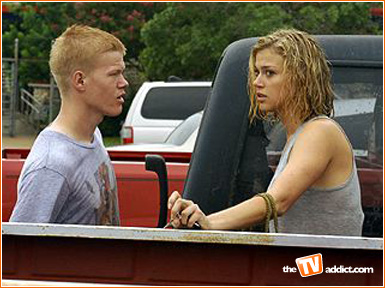 Since news leaked that NBC is shopping FRIDAY NIGHT LIGHTS to the likes of the CW, TNT and E! in an effort to find a broadcast partner to defer the cost of the show’s third season. This TV Addict thought he’d lend a hand by offering up a few potential plot ideas for the future home, and favorite new network of the Dillon Panthers football team.

FRIDAY NIGHT LIGHTS on the CW
Following the split up of her parents and her sordid history with Tim Riggins, its revealed that Lyla Garrity’s entire ‘born again’ Christian schtick was simply the ultimate cover up for her bad behavior [see CRUEL INTENTIONS]. When FNL premieres on the CW in September, expect the unexpected as born again mean girl LG attempts to reclaim her title as queen bee of Dillon High. Also in the cards, a steamy affair for Coach Taylor when the new nanny the Taylor’s hire turns out to me [gasp!] ex-contestant on AMERICA’S NEXT TOP MODEL.

FRIDAY NIGHT LIGHTS on SCI FI
Jason Street, determined to reclaim his former football glory volunteers for a top secret government operation that replaces 60% of his body with bionic parts. This September, join Jason Street as he juggles friends, family and his football dreams. All the while secretly spanning the globe to keep America safe from Terrorism. The name’s Street, Secret Agent Street.

FRIDAY NIGHT LIGHTS on TNT
Tyra and Landry thought the nightmare was over… they thought wrong [Cue ominous music]. After nine years in the New York City Police Department, Detective Green (Jesse L. Martin) returns to his hometown of Dillon Texas hoping for an easier go of it as a local sheriff’s deputy. Unfortunately, a mysterious man has come to town, one who just so happens to be displeased with the ease in which Tyra and Landry were exonerated of that pesky little murder back in September. Will Detective Green be able to keep the fine folks of Dillon safe from a madman intent on taking justice into his own hands? Will Tyra and Landry’s nightmare ever end? Find out this September on TNT.