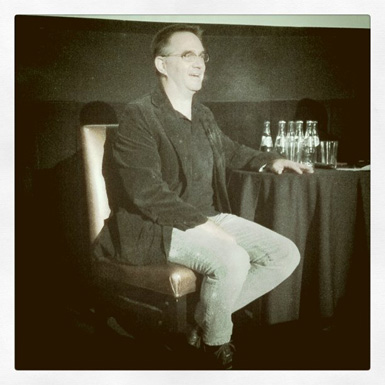 Last night, your very own TV Addict was fortunate enough to attend The Canadian Film Centre’s Test Pattern Series honoring native countryman Hart Hanson. Entertaining, informative and armed with a surprisingly spot-on Australian accent, Hanson wowed the audience of loyal BONES fans as he spoke candidly about the glorious highs and dizzying lows that comes with running one of the most popular shows currently on the air. Highlights of which we’ve tried our best to capture in our live blog below.

7:50PM: Moderator Richard Crouse (who did a bang up job by the way) introduces Hart Hanson and muses that it must be nice for the BONES showrunner to watch an episode — which in this case was “The Maggots in the Meathead” — with an audience. “It’s terrible, every possible weakness in the show is manifest,” said Hanson half-jokingly. “But it is really nice to hear people laugh since we think of BONES as a romantic ‘Crimedy’.”

7:53PM: In the first of what would turn out to be a series of fun facts that were “news to us,” it was revealed that the genesis of Hanson’s involvement with BONES was not so much as a result of his passion for forensics, but rather the fact that he owed 20th Century Fox a pilot after bailing on a legal drama. “It was a very fast shotgun marriage because I didn’t want to do a forensic or a procedural show. In fact, I incorrectly thought that ship had sailed,” explained Hanson. “There’s a million forensic shows. surely there is was no more room for a straight procedural? But I was wrong, there was plenty of room and it helped us to find our niche.”

7:55PM: From the department of “Well, Duh!” comes Hanson’s theory as to why the show is so popular with woman. “I don’t think David Boreanaz hurts, especially if every once in a while he takes his shirt off!” Being sure to add on a more serious note how much co-star Emily [Deschanel] resonates with the audience, “I promised Emily before she took the job that the number of times Booth would save her would be very small. I had to promise that to her and I meant it.”

7:57PM: Hanson credits the idea of kicking off each episode with a signature horrible or baffling occurrence to smarter than a fifth grader Fox exec Craig Erwich. Also calling co-executive Producer Stephen Nathan his right hand man. “Stephen Nathan is an old hippie, a song and dance man who actually played the original Jesus in Godspell. He’s a real f*ck the man kind of guy and loves to argue, so putting him up against Fox’s Standards and Practices is one of the real joys of my life.”

8:05PM: Good News: Like most reasonably sane people, Hart Hanson detests serial killers! Bad News: Network execs love them because American television audiences can’t seem to get enough of them. An obsession which interestingly enough resulted in one of Hanson’s biggest BONES regrets that we’ll affectionately refer to as The Gormogon Incident. “It was just bad showrunning,” admitted Hanson. “The original plan was to have Zack be a victim of the serial killer, but then there was a writer’s strike. There are no excuses in TV, but along came the strike, which not only curtailed our year, but didn’t allow us to do the story as it originally had been laid out. And then I felt very bad for the actor [Eric Millegan] because he was going to lose his job by being killed. So I thought if I’m making him the apprentice, he’d be able to come back every once in a while and make up that money. I probably should have killed him, but I didn’t have the heart.”

8:10PM: Fun Fact, according to researchers nestled deep inside the Fox mothership, studies have shown that
it only takes three episodes of BONES for a viewer to get hooked. Now, by no means are we condoning the use of physical force to tie down friends and family members to watch the show, we’re just letting you know that according to Hanson, “People watch one and they go, ‘That’s alright.’ Two, they say, ‘That’s a nice show.’ But if you watch three, ‘We’ve got you’.”

8:12PM: Attention Entertainment Weekly Editors who are currently seeking votes for the most under-appreciated entertainer of the year. “I know I’m bias, but I honestly believe Emily [Deschanel] is the most underrated actress on TV,” said the showrunner. “Every year we have to watch lovely Mariska Hargitay go up and get the Emmy while I’m thinking, “She didn’t throw the crab at anyone [referring to a hilarious scene in the episode we just screened]. She didn’t have to say dialogue that would kill a normal human being and then make you weep a little.”

8:15PM: What’s the only thing more challenging than dealing with a legion of incredibly vocal fans? Coming up with creative ways to murder people on a weekly basis! Said Hanson, “What I have to do now working on a murder show is get the writer to tell me the story from the murderers point of view, because it drives me insane when the killer doesn’t have a motive. And quite frankly, after 108 episodes, it’s getting harder and harder to not repeat ourselves.” Which naturally gives us an idea for an impromptu completely off-the-top-of-our-head pitch assuming Hart Hanson is reading this… ready: When a television writer is found murdered, his twitter feed provides the only clue, transporting Booth and Brennan into the increasingly bizarre world of online fans who may-or-may-not have taken their obsession with a fictional character’s love life a little too far! Just an idea, no pressure, but feel free to have your people call our people anytime.

8:18PM: And since we’re on the subject of passionate fans, the main event, or at least the portion that Hanson’s 25,000 twitter followers are probably most curious about is on the subject of Booth’s latest love interest, Hannah. “I came into the Hannah story knowing where it goes, but Katheryn [actress Katheryn Winnick] is more interesting than we thought, so we make adjustments,” teased Hanson coyly. “I’m being as oblique as I possibly can, there are people who are starting to notice that maybe Hannah was brought in to be another foil for Brennan as much as she was for Booth. That’s true and I’m glad that people are starting to notice that when they stop shouting and there’s a lot of shouting about Hannah. I know where it goes, I know how it ends, but we have made some adjustments to how it plays out.”

8:22PM: Needless to say, everyone has an opinion on how they’d like to see the Booth and Brennan relationship play out. Including the very vocal head of the ABC Network (Australia’s Broadcast Network), who at a recent Fox Party for its international clients had this to say, “Don’t let ’em f*ck!” recounted Hanson complete with a fairly credible Aussie accent. “I’m not kidding, He just kept saying that I better not let them f*ck and that they’ll all tune out the minute I let them f*ck!”

8:25PM: “I actually don’t believe in the MOONLIGHTING curse, but it doesn’t mean that it won’t look like I do. The trick is, the main thing to BONES when it went from being a murder show to being a way to figure out how to replace the unrequited sexual tension between two people with something else of equal power and that is easier said than done,” said Hanson on the subject that just won’t ever seem to die. “That’s what happens, and it better work. If I’m wrong and I have them get together tomorrow and what I think is the thing that will replace it, if I’m wrong, then the show will go off the air, a lot of people will lose their jobs, and it will be very very sad.”

Be sure to check back tomorrow when Hart Hanson answers a lightening round of questions that followed last night’s more formal panel discussion.