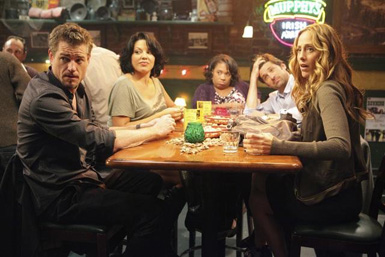 Allow me to preface this review of GREY’S ANATOMY with a giant, italicized asterisk: It’s true — in many ways, the seventh season of ABC’s genre-defining medical soap is good. Is it “great again”? This would imply that it was great before, a memory I wish I could fondly look back on, but can’t. I’ll admit to have been taken with the doctors of Seattle Grace in their initial seasons: they had chemistry, gave some nice performances, and creator Shonda Rhimes knew how to thread melodrama and bizarre medical cases together in way that made for a hospital show with a unique spring in its step. It was a sexy, quirky trifle.

This did not last: By season three, these doctors became so insufferably whiny and their patient stories bludgeoning with their emotional manipulation, that when Addison (Kate Walsh) made a dash for her own spin-off, I ran off with her. Alas, Private Practice was a dud, and I thought my hands would be clean of Drs. Grey, Shephard, et al., but here I am, sullied in another season of high drama, bludgeoned again by weepy cases (there is a level of craft at work in making you teary for Mandy Moore), and great hair. (Seriously, from Patrick Dempsey’s eternally-suave ‘do to Chyler Leigh’s bouncy locks, this show is like a shampoo commercial.)

The cast is dealing with the fallout of the shooting, some more compellingly than others, but it remains a charging sense of motivation for the show, raising the emotional stakes, if ever so slightly, past their usual superficial levels. And though overstocked with characters, it nobly attempts, to uneven results, to bring them all up to the same developmental level. I especially like where it’s taking the perky and precocious April (Sarah Drew), a new doctor from the hospital merger that could have easily been grating, but is a great, almost adorably earnest underdog with a stroke of crazy in her, and Drew plays her with the sweetness of a younger sister you can’t help but love. As for the other remaining merger holdover, Dr. Avery (Jesse Williams)? A boring smoothy. Also: Can we please give Kevin McKidd and Kim Raver, two fine actors who’ve proven themselves in the past, something substantive to do?

Christina (Sandra Oh) is in a PTSD lethargy that’s keeping her from engaging at work, much less performing the complicated surgeries she usually fights for. The trauma is understandable: the shooter held her at gunpoint while she was removing Derek’s bullet and shot Owen in front of her. Part of me worries that Christina’s struggle with the shooting has been played out a little too long, and the other part of me doesn’t want Sandra Oh to stop her powerful performance — you share in her frustration, horror, and anxiety.

It’s worth noting that when all the residents or attendants get together in those great lunchtime scenes, they trade some of the show’s best banter that is darkly and often inappropriately humorous. It’s great. Among the expanding web of relationships, one stand out as especially well done: Callie (Sara Ramirez) and Sloane (Eric Dane), who bond over their love of women, tough guy attitudes, and their relationship hang-ups. It rises above the lesbian-straight man gimmickry.

And after what seems like an eternity of pining, coupling, and de-coupling, Meredith and Derek (Mer-Der? This moniker bothers me. It’s so cheesy.) are finally, happily (as much as a TV couple can be) married and in a functioning, real relationship. That I care so much is telling of how quickly this show can sweep you into its clutches — that I continue to watch despite its extra-goopy monologues, ridiculous metaphorical medical cases, and propensity for self-absorption (Who cares if you’re breaking up? Your patient is dying.), is proof that its addictiveness is directly tied to my self-loathing for liking it.

After screening all the episodes that have aired this season (seven), I’m beginning to understand some of its praise: If you surrender to Shonda Rhimes and her world of domestic histrionics, gooey sentimentality, and thematic homogeneity, even for a second, you’re doomed. You’ll not only allow yourself to be controlled, but welcome it. The relationship between an entrenched GREY’S viewer and the show is a sick, downward spiral into a bottomless crevasse — but damn, what a guiltily pleasurable ride.  Grade: B