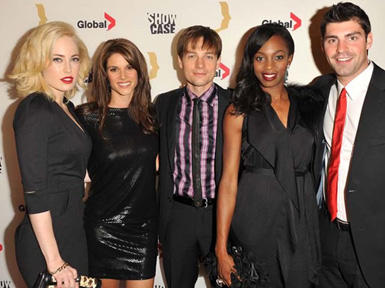 On Saturday November 13, Canada celebrated some of the best and brightest we have to offer the world of television at the 25th Annual Gemini Awards (Think: Canada’s Emmy equivalent). Hosted by GLEE’s Cory Monteith, we are not exaggerating when we say everybody who is anybody in the world of Canadian TV was there. Including, theTVaddict.com’s very own Melissa Girimonte (@thetelevixen on twitter) who, planted firmly on the red carpet had the enviable “job” of interviewing the likes of Nina Dobrev, Grace Park, the cast of ROOKIE BLUE, and more. Interviews we’ll be sharing all week in a series we’ve cleverly coined Gemini Gems.

How blown away were you with the success of ROOKIE BLUE’s first season both north and south of the border?
Gregory Smith: We were really nervous before it came on because we enjoyed doing the show so much and we had to wait while for it to actually air and when it did, for the numbers to come in the way that we did it was almost surreal.

Out of all the rookies last season, your character definitely was lacking in the romance department. Any chance Dov will get a girlfriend this season?
Yeah, I think so and maybe more than one!

And since you’re well aware of our obsession with your previous series, we have to ask if there is any chance that one of those lucky ladies might be Emily VanCamp?
You know, I tried, I spoke to her about it and she really likes the show, but the timing didn’t quite work out. We’d love to make it happen sometime in the future though as it would be a really fun little throwback for fans of EVERWOOD.