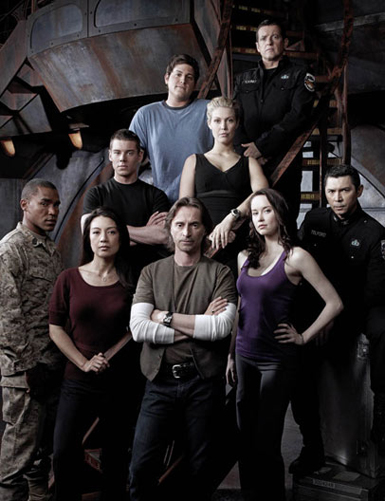 On the fateful day that it was announced the Syfy had canceled STARGATE: UNIVERSE the sci-fi fans rose up in anger and the sleeping horde of sci-fi fans let their voices be heard. It was the second time in as many months that a beloved sci-fi series had been canceled – on the same television network no less. It was a double-blow to an increasingly diminishing genre.

Science fiction has always been a hard sell on television. For one, the mass viewing audience tends to avoid anything remotely looking like science fiction. Another reason for the problems surrounding sci-fi shows gaining traction on the television landscape is that sci-fi fans are picky in what they will embrace. They are unforgiving of so-called bad sci-fi shows or lackluster writing.

Whatever the multitude of reasons, sci-fi fans did not whole-heartedly embrace CAPRICA and STARGATE: UNIVERSE. Thus, it was with a heavy-heart that both were reluctantly canceled. But the ratings showed that fans were abandoning the shows, not sticking by them. So in light of the eroding audience retention, the ax fell.


We can debate why fans were not tuning in for the live broadcasts, or avoiding watching such stellar sci-fi shows. But, in the end, the reality remains the same: time had run out. With 10 episodes remaining to air hopefully next Spring, STARGATE: UNIVERSE will have a chance to still enter sci-fi canon. It may or may not be the last chapter of a long legacy of STARGATE franchises. Let’s hope not. But it will be a dark hour to see the last of a remarkable universe explored by three different television series.

STARGATE: UNIVERSE began innocuously enough. It introduced an array of characters forced to flee through a wormhole onto an alien spaceship over which they had no control. Light-years away from home and unable to return home because much of the ship’s functions were damaged, the escapees had to learn to cope with being lost-in-space without the resources necessary to survive. The premise was familiar, yet more limited in scope of another classic sci-fi series where a rag-tag group of survivors were forced to flee into the stars.

Having been forewarned, I knew that the initial episodes would be heavily foundational. As the survivors on the alien-ship Destiny took their initial steps into alien territory, the viewer would experience each incremental step. Not every episode could start with a space ship fight. Much of the episodes were to emphasize the need for basic necessities and how ill-equipped a group of civilians and military personnel would be to secure such things when they have no ability to determine where they are going and the emotional strain and stress that would place on each of them.

However, right from the start, one of the largest portions of the sci-fi fan base was outraged over the portrayal of women on the series. While subsequent episodes did well to temper the outrageous stereotypes and give credence to a more equal status in the series, many female fans jumped ship (figuratively). Then many of the male audience became critical of the series’ laborious tone and pace. They wanted more action, more gunfights, more space battles. Alas, STARGATE: UNIVERSE was a series not equipped to provide all those testosterone-laden elements. Instead, STARGATE: UNIVERSE was something more. It was a thinking-fan’s show. It was borrowing from earlier sci-fi series and laying the groundwork for intellectual debate, more than simple physical confrontations. It wanted to use physical confrontations sparingly and as-needed to propel the story it wanted to tell.

But the damage had been done. Many female sci-fi fans had stopped watching and many male fans were too impatient to endure a well-thought out storyline. That left a tenaciously devoted core of fans who were delighted in the carefully constructed storylines intermeddling short-term and long-term story arcs to keep the fans engaged. STARGATE: UNIVERSE also began unpeeling the layers of each of its complex characters – each neither fully altruistic, nor all evil at their core. The series wanted to explore the shades of gray and allow its characters to reflect as much possible the flawed humanity in which we all live. People are not clear-cut good and bad – they are something in-between; and to choose to highlight the flaws – the cracks in each person’s soul – was intriguing.

Therefore, the lens in which STARGATE: UNIVERSE portrayed humanity was multi-faceted and provided a potentially limitless number of stories that could be told with just a core group of characters.

Having been given the time needed to establish its basic premise and introduce its characters, by episode 10 (“Justice”) the show had finally come into its own. For the fans who had stuck around, their patience was rewarded. When the show allowed Dr. Rush to be beaten to a pulp and left for dead on a planet while Col. Young returned to Destiny without him, it was galvanizing. Suddenly the harsh reality and brittle personalities stretched beyond their breaking point had reached a violent and brutal climax. It was brilliant storytelling. It left viewers breathless with anticipation during the long 4-month hiatus.

Then, astoundingly, the show returned with even more force and momentum with the introduction of the Ursini aliens in “Space (part 1).” The Ursini had rescued/captured Dr. Rush and had performed untold amounts of experiments on him. The simultaneous rescue of Dr. Rush and Chloe who had been abducted right off the Destiny ship was breath-taking. This was STARGATE: UNIVERSE. It had laid its foundation so carefully that when the story broke out, it caught us all off-guard and became the cutting-edge series that we had hoped for.

In the subsequent months, the series reached another major crossroads with the incursion of the Lucian Alliance and the loss of T.J.’s baby. The dangling storylines thought forgotten were resurrected and woven into the main story. It was a roller-coaster ride that was moving faster and faster.

When the show reached its second season mid-point, it left us wondering if the Destiny-ites would forsake their journey home to Earth and go in search of the beginning of the universe, while being hotly pursued and toyed with by the Ursini aliens. The show was just about to embark on another fantastical journey. It was therefore a cruel blow to learn that when STARGATE: UNIVERSE returns in Spring 2011 to finish its second season, that will be all there is. We may never learn if Destiny would actually take them to the beginning of life itself and what they would have found there.

It is also likely that the series will end on a cliff-hanger as the cast and crew found out about the cancellation after they had wrapped the second season finale; in which case, fans will be even more outraged when that time comes.

It feels too soon to really mourn a show that is coming back for 10 more episodes. But knowing in advance that those final 10 episodes will be the last, shall make them that more precious. As with any TV show that is canceled before its time, it is hard to understand the “why’s” of it all. But in the end, the “why’s” do not matter so much as taking the time to appreciate what we were given. In today’s ridiculously impossible world of keeping a television show on the air, it is a blessing that STARGATE: UNIVERSE was given two full seasons. Not even CAPRICA can boast that feat.

So I challenge the sci-fi fans who loved STARGATE: UNIVERSE: cherish the final ten episodes. Do not wail and gnash your teeth in despair. Rejoice that we were given those episodes at all. Sci-fi television is still in decline. It is a dying genre. Embrace the final amazing moments that are actually given a chance to be broadcast — for not every television show is given such a graceful end. It is time to appreciate what we are given.

Tiffany Vogt is a contributing writer to The TV Addict. She has a great love for television and firmly believes that entertainment is a world of wondrous adventures that deserves to be shared and explored – she invites you to join her. Please feel free to contact Tiffany at Tiffany_Vogt_2000@yahoo.com or follow her at on Twitter (@TVWatchtower).