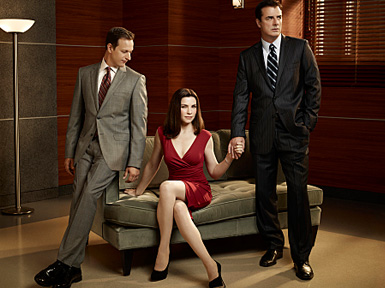 When looking out over the television landscape today, one would be hard pressed to find even a few crumbs of romance.  There are oodles of relationships, people sharing intimacy, and more than a fair share of people breaking-up and making-up.  But there is very little actual romance.  As a viewer who is drawn to the likes of classic Jane Austen, I find myself shifting through the primetime television shows in search of even a sliver of a romance.  In fact, it feels rarer than if one were to go panhandling for gold itself.

Romance is not about people falling into bed, shacking-up, or making out with their flavor of the month boyfriend or girlfriend.  Instead, it is something much more delicate and elusive.  Romance is a hint of a soft whisper, the briefest of caress, or a stolen look of desire.  Perhaps it is naive to believe that viewers are even looking for romance on television today.

But I imagine that there are more than just a few of us turning the channels, pouring over our TV schedules and praying for a miracle as we watch what is currently being broadcast.  Crime procedurals, legal dramas, medical dramas, family dramedies and teenage angst are all fine — if that is what you are in the mood for.  But, then there are the days, when I sit in front of my television wishing that it could magically offer an escape from the harsh world we live in — to be transported some place where there is beauty, love and engaging stories of people searching for and finding love.

Sex is easy to find on television.  Throw a rock (figuratively) and you are bound to hit something offering titillation and clothes being shed faster than you can exhale.

Yet taking a moment to think about the television shows currently on the landscape, I found that there were few examples of the pure romance that romantics-at-heart search for.

Perhaps noting the vacancy of romance on television, the writers of CASTLE have cleverly embedded some of the more heart-warming moments of romance on primetime, which included a recent impromptu proposal and a searing kiss in recent weeks.  It was as if the writers had brushed up on such classics as “The Importance of Being Earnest” which integrated comedy with romance in a delightful way.  Each episode is now beginning to feel like a rose petal is slowly being peeled back and we cannot wait to see what each new layer reveals.

There is a reason that Jane Austen is considered timeless.  Her books consistently sell; her movies are remade every decade to seduce a new generation; and for romance-aholics world-wide, she is the queen of romance.  Not the kind of romance you find in the average “romance” novel (which are more accurately described as bodice-rippers); but romance where men hide their feelings, woman dared not believe that true love was possible, and yet, in the end, with a gentle shove, love found its way.

If looking for another example of just a nod to classic romance, it can be argued that THE GOOD WIFE, with all those lingering looks between Will Gardner and Alicia Florrick, which make us catch our breath every single time, dabbles ever so slightly in Austen-esque longing.  It is not just the courtroom suspense that has viewers tuning back in, but rather to see the next dance between Will and Alicia.  Does he move forward as she pulls back; or will it be the other way around this time?

Another series which offers its fair share of delicious romantic moments is the Canadian series BEING ERICA.  Focusing on a 30-something woman who has lived a lifetime of regrets and is given a chance to go back and undo each and every one of them, Erica Strange discovered she had been given a second chance on love with the guy that got away.  Then when that relationship failed to blossom, Erica’s fate became intertwined with a man living outside of her timeline.  It is a classic tale of how does one find their soul mate when they live at a point in time that is unattainable?  Time travel is but a cruel tease for star-crossed lovers.

Then looking across the television globe a bit further and looking back at one of the more epic tales of romance, there is the British fairy tale series MERLIN.  It may offer battles with sorcerers, knights and dragons, but at its core, everyone knows that it is really about the love story of Arthur and Guinevere.  The tale of a prince who fell in love with a servant girl and made her his queen has made romantics swoon for hundreds of years.

While the shows listed here are not true romances, they have found fun ways to sprinkle bits of romance throughout their shows in order to hook their viewers.  Each show would still be compelling if merely a mystery series, legal drama, time-traveling adventure and action adventure, but taking the time to add just a few extra moments here and there, they are more than compelling.  The dash of romance has made these shows addictive.

When fans flock to the message boards, they do not want to talk about who the murderer was, whether a fair verdict was rendered, or how great that battle sequence was — instead what they really want to talk about is the stolen kiss, the lingering glance, the soft caress as two hands brushed, or the forbidden declaration of feelings.  For what ultimately matters and intrigues us are unexpected moments of spine-tingling pleasure.

Not to be left out, another series that has perfected the art of interspersing romance amongst its horrifically bloody storylines is THE VAMPIRE DIARIES. Ask any fan and they will be quick to share their passionate love affair with this show simply because it consistently offers up tasty morsels of romance.  Whether it be the will-they or wont-they dance between Elena and Damon, the tug-of-war between Caroline, Matt and Tyler, or the brooding, yet unabashed declarations from Jeremy to Bonnie; romance is an intricate part of the series and one of the primary reasons the show has carved out such a dedicated and loyal fan base.  THE VAMPIRE DIARIES is not about hook-ups, like most teenage fare.  It knows that at its heart romance is about desire.

That is the secret:  romance is desire.  It is in the pursuit, the unattainability, the fleeting moments that spark and tantalize.  It is more addictive than just about any other vice.

What is truly remarkable is that more television shows have not yet figured out how to use this delectable ingredient to add more flavor to their shows.  Their loss.

In the meantime, I, along with millions of other romance-addicted viewers, will be tuning in for our fix.  Thank goodness for shows offering even just a little romance.  At its core, romance is defined by its elusiveness.  When it is captured but for a moment, it hooks us forever.  Just ask Jane Austen (or better yet, her book publisher).  Romance sells.

Thus, the search for romance today on television, like all great romances, is elusive, but it is there.  You just have to look for it.  Trust me when I say, it is worth the pursuit.  It will captivate you, enthral you and make you crave more.  It is, after all, what we all live for.  It is the promise of love.

So I ask again: is romance on television today dead?  Not if you go looking for it.  It just takes a bit more shifting through the vast morass of shows to find those beautiful moments that melt our hearts and send shivers down to our toes.  Romance on television is as secretive as the love it conveys.  But once found, it is richer than a treasure chest of gold.  Romance is after all the key that unlocks the heart.  May it continue to enthral and seduce us — and reward those who discover it in the most unexpected of places.