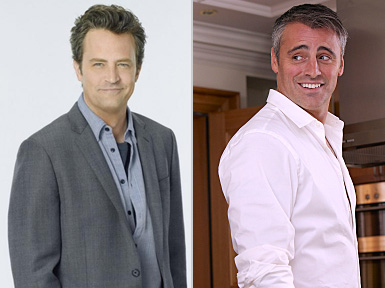 When I read about the pilot pickup for Showtime’s EPISODES, where the adaptation of a hit British series about the headmaster of a boys boarding school is cannibalized in its adaptation for U.S. airwaves, I thought it seemed almost too meta for anyone but people in the business (and TV critics) to enjoy. If ENTOURAGE is any indication, the predilection for a fictionalized behind-the-scenes look into Hollywood to become as loathsome as the industry itself seemed too great a detractor. But ENTOURAGE this is not: EPISODES is a bizarre little show, and if I were to liken it to anything, it would be THE COMEBACK. And that’s not entirely because it stars another FRIEND.

Like the tragically misunderstood (and thusly short-lived) HBO series starring Lisa Kudrow, EPISODES takes special care to make its star as un-FRIENDS like as possible. Matt LeBlanc plays a fictionalized version of himself, or rather a Showtime version of himself: a bit of a ruffian, he sleeps around, gets slovenly drunk, makes remarks about his anatomical endowments, and flaunts the riches of his FRIENDS money. There’s a frankness he brings to his character that’s arresting: you’re nearly convinced that this Matt LeBlanc might be the shadings of the actor himself – like Tracy Morgan in 30 ROCK, much of the success of the performance and the character is the difficulty in separating the two, even though LeBlanc’s public image is comparably more staid, you get a sense that his character’s behavior might be exaggerated traits of his own.

Otherwise, EPISODES is actually a fairly standard satire of the TV business, replete with out-of-touch network heads (though John Pankow’s Merc Lapidus is a hoot as the net exec who greenlights the remake having never even seen the show), unfriendly Hollywood types, and ruining creative changes (the show is almost unrecognizable, rejigged as PUCKS!, with LeBlanc’s character playing a boy’s hockey coach). At the center are the original show’s creators, Sean and Beverly Lincoln (Stephen Mangan and Tamsin Greig), lured to LA for the glitz and glamour only to see their creation torn apart. The Lincoln’s are a marvelous TV couple in that their relationship is realistic: they fight, occasionally bicker, but never is their love and affection for each other ever in question, and they trade some of the best banter the show has. Tamsin Greig, whom I’m ready to campaign for come Emmy season, captures Beverly’s boiling incredulity of the events unfolding in front of her with zest and wit. She voices all the viewers own concerns and in that regard she’s EPISODES’ true star.

The FRIENDS cast (the non-Jennifer Aniston ones at least) are slowly making their returns to screens small and large, and taking place of Courtney Cox’s COUGAR TOWN is Matthew Perry’s MR. SUNSHINE, which based on the pilot, makes me wish TOWN’s hiatus would end even sooner. Perry plays Ben Donovan, the manager of the Sunshine Center sports arena in San Diego, a character completely uninterested in any of the other characters (besides Andrea Anders’ Alice, his female friend with benefits).

Ben’s apathy only subsides briefly when he’s annoyed, like when he’s forced by the eccentric and loopy area owner (played by Allison Janney, who does her best with what she’s given) to babysit her nerdy grown son; he brushes him off almost as immediately he’d like to do to us. Oddly, Perry is playing a character so difficult to like that the feeling is mutual – I don’t want to spend any more time with him than he does with me. Characters don’t have to be likeable (isn’t that the whole premise of GOSSIP GIRL?) but at least there’s usually an underlying redeemable quality – being funny usually works, a comfort not afforded here. In the immortal words of Chandler Bing, could this show be any more unpleasant? Grades: EPISODES: B; MR. SUNSHINE: C-