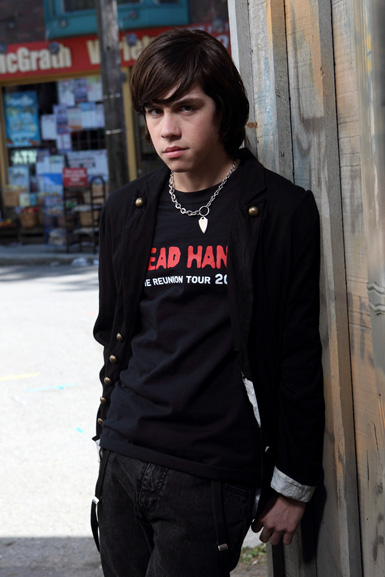 When your school has served as an inexplicable magnet for a multitude of dark, brooding and mysterious bad boys for the better part of a decade, it ain’t easy to stand out from the crowd. Yet in the first half of this season, that’s exactly what DEGRASSI’s Munro Chambers has done since debuting as Claire-loving, hearse-driving, dead-ex-mourning Eli.

And while his close-to-50,000 twitter followers — yes, you read that right — would tell you Chambers is one very popular guy, it turns out he’s one of those well-spoken, modest sorts who likes to give credit where it is due (in this case, to his fellow co-stars). In preparation for tonight’s kick off of season 10’s second half (airing at 9PM on TeenNick, MuchMusic in Canada), the affable star sat down to chat with us about how DEGRASSI has changed his life… and what to expect next for his troubled alter ego! 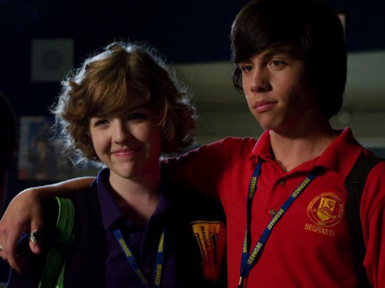 Your character Eli was chock-full of surprises during the first half of last season, how much backstory did the writers give you before joining the show?
Munro Chambers: I didn’t really know a lot going into it because originally I had auditioned for Luke Bilyk’s character Drew, and then on the spot they made me audition for Eli. The writers are very secretive and do a very good job of making the story-lines like real life, because you don’t know what happens in real life so why would you know in advance? I didn’t know that Eli would be a hoarder, I had no idea about the dead ex-girlfriend, so it really was a journey to go through it with him which is a lot of fun.

Eli’s hoarding subplot may have been one of the most unexpected turn of events in DEGRASSI’s history. That said, it made complete sense with in the context of the character. What type of research did you do in preparation for that episode?
I was very excited about that storyline and I though it was a nice challenge as an actor. We were fortunate enough to have a crew member who was a hoarder and I really got to talk to him personally about it and how he went to therapy sessions and just really got into the mind of what it was. Hoarding is not just a normal thing, it is a disease and there are very specific aspects to the disease and the OCD behaviour that I really wanted to understand. I really wanted to do justice and not make a mockery of hoarding and I really wanted the fans and other hoarders who were watching the show to be like, “Okay, he did a justifiable job.”

Eli’s relationship with Clare (Aislinn Paul) has become one of the most talked about aspects of the show, do yourself and Aislinn get as well off screen as you do on?
Me and Aislinn get a long very well. We worked together five years ago on a movie of the week called MURDER IN THE HAMPTONS and despite the fact I didn’t get to see her that often because I was working on a TV show in between DEGRASSI and when we worked together we’re great friends off camera. And I think that’s what makes the chemistry between us so good. Because we are able to relate on that level and she’s such a talented actress, it’s just effortless. It’s a lot of fun to work with her and get into those emotional scenes with her because I know she’ll be able to carry me with her as long as I’ll carry her. We just kind of go back and forth like a good teammate.

Clare and Eli ended off last season on somewhat of a happy note. Unfortunately, happy doesn’t exactly make for exciting television when it comes to DEGRASSI. So what can you tease about what we have a feeling will be a rocky road ahead for the two characters?
It’s going to get a little crazy. We have some people returning, I’m not going to name who, but it’s really going to mess with Eli’s head. We’re going to see if Clare is going to be able to deal with all the baggage that Eli has, he has a lot of history that we don’t even know about yet. Like Shrek, he’s an onion and has so many layers! There’s a lot to him, plus Clare’s going through a lot of stuff with the divorce of her parents and her coming into her own self as a woman, it’s going to be hard for them and their relationship. To the fans, just let’s hope they can make it through but we’ll see.

One of the teasers for the new season that shows Fitz coming back has fans worried for Eli’s life. Are Eli and Clare going to make it through the season alive? Is there anything you can say to alleviate their fears?
(Laughs) Well, I hope they make it! Fitz is making a little bit of a return, but he may surprise you.

With almost 50,000 twitter followers, many are calling you this season’s breakout star. How do you react to that?
I just think it’s really appreciated. I appreciate everything about it. I’ve never been that kind of guy and that kind of actor to do the fame driven stuff, and the Twitter thing I was really not agreeing with, never really wanted to do it. But when I finally got it i got such a reaction from the fans and realized how much they support me and it’s been really nice. It’s really shocking to me when I first got Twitter I was trending in the world and that was surreal to me and I just really am having a lot of fun on the show and that’s really what I want to focus on.

Breakout character? I think Luke Biylik is outstanding, Alicia Josipovic is an amazing dancer and she’s really making her debut strong in the second part of the season and Jordan Todosey plays a transgender character of Adam which is fantastic for the season, it’s a great story line and I feel like everyone has really stepped up their game. The entire cast is so talented and U feel like I have a lot of great ensemble cast to help me out and I think that helps and make the show sparkle.

It really has been a fantastic season, which is only surprising in the sense that you now have far less time to shoot each episode. Do you think it’s possible the intense shooting schedule has helped raise everybody’s game in the sense that everyone now has no choice but to come prepared to set?
Definitely. I was fortunate enough that on my last show, THE LATEST BUZZ, we had that format. We did that fast paced 15 pages a day kind of format, so I was excited to see that going in because I find that I work better, more efficiently and everybody stepped up their game because they were told going in that it’s going to be faster than it’s usually been, more intense but nobody had a problem, nobody stressed out, everybody knew their lines and was really ready. And I think that’s what made the show even that much better because we focused more on the work. Not that on previous seasons they weren’t doing that, but I feel like that’s what brought us to the next level, making sure we can do those 48 episodes.

Has an eleventh season officially been announced yet?
[Note: Despite our scoop to the contrary, friendly neighborhood DEGRASSI publicist is quick to interject, “Nothing has been announced by either network at this point.”]
I hope they will, I know how the season ends and I think it’s going to be a really interesting big cliffhanger for everyone.

What’s that about a big interesting cliffhanger! Just how big a cliffhanger does the season end on?
The finale is awesome. The last 4 episodes are awesome, it’s epic. That’s how I would describe it, epic, in every sense of the word.

And finally, one can’t really talk about DEGRASSI without talking about the insane levels of success former cast members have found post-DEGRASSI. Between Aubrey “Drake” Graham, Nina Dobrev (THE VAMPIRE DIARIES) and now Landon Liboiron nabbing TERRA NOVA, do you ever think about where this show could potentially take you if you play your cards right?
Well for me personally as an actor I always focus on the job at hand, you don’t really focus on the next job because you’re an actor, it’s the art of unemployment a lot of times. For me I look at those guys and think they did their stuff, they earned it. And for me I’m hoping I keep bringing my “A” game and if I get cast on stuff after this then I will. I’ve had my ups and downs as an actor of doing a show, getting a spinoff, not getting a spinoff, and then not working for a year and a half. As an actor you have to understand that the industry is up and down, really bipolar and hopefully a lot of us make it out there in the American stuff. if not, just keep enjoying what we love to do which is keep working and acting.