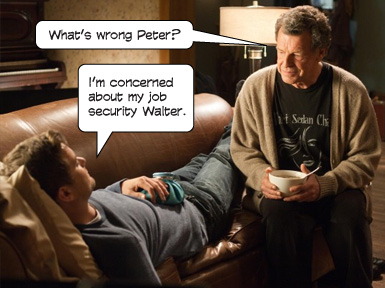 In a continued effort to get a better understanding of the decision making process that goes into renewing or canceling our favorite shows, we asked Michael Hinman, editor-in-chief of Airlock Alpha to shed some light on one of the most important, albeit least talked about factors: The license fee.

Ratings make the television world go round, and everyone has their opinion on whether television ratings are or have ever been accurate.

But while ratings are an important factor in whether a program lives or dies, it’s not the only factor. Especially today, when a television show can generate revenue in so many different ways beyond a network timeslot.

More and more, attention is being paid to licensing fees — the money networks pay production houses to air their programs. Many — if not most — television shows aired by a network are not produced in-house, meaning they come from production companies like Warner Bros. Television, Universal Media Studios (owned by NBC Universal) and more. Yes, you could very well find an NBC Universal-produced show on a rival network, like HOUSE, M.D. Yes, it airs on Fox, but is produced by Universal Media Studios.

For HOUSE, Universal Media decides its budget for the show and how much it would like to profit, setting a number — a license fee. It then goes to Fox and say, “Here is our license fee, let’s start negotiating,” and before there is a renewal, both sides have to agree on that license fee.

In the old days — say pre-1999 — almost the only revenue stream domestically was network broadcast. Once you got close to the 100-episode mark, you could anticipate selling syndication packages to television affiliates across the country and make more money there, but until you got there, you depended almost solely on the amount of money a network was willing to give you to broadcast a show.

So predicting whether a show would continue or not, especially in the earlier years, would be a bit easier. If you didn’t meet specific ratings thresholds, you were most likely a goner. You may get a reprieve if you were in your third season, and a renewal would mean enough episodes to sell into syndication — and then, as a production house, you might cut your license fee, and even take a loss, anticipating the money you’d make in syndication.

But today, you don’t have to wait until the third or fourth season to anticipate new revenue streams. Today, production houses can start making money outside of a network broadcast from Day One. They can license to Hulu, iTunes and more. Even if they produce just half a season, they can release that season on DVD and sell directly in the consumer market. These were avenues virtually unheard of 15 years ago.

That means that production houses can use an old sales strategy known as a loss-lead. Probably the best example of a loss-leader is in the gaming console market. Sony makes a PlayStation 3, equip it with Blu-ray and the ability to play the latest games. If Sony sold its PS3 at a retail price beyond its cost to produce it, people probably wouldn’t buy. Plus, it has to compete with the Nintendo Wii and Microsoft’s Xbox 360.

So what will Sony do? It sells its PS3 at a loss. Meaning, it might sell the console for $250, for example, but it likely cost them $275 to build it. And while $25 might not seem like a lot — multiple that by a few hundred thousand, and that adds up.

Yet, if you’re a PS3 owner, you likely will buy games, which typically have a markup of at least 200 times its total production. You’re also going to buy Blu-ray discs — a technology Sony has a significant investment in. So it might lose that $25 in the console itself, but it now has a device sitting in your living room where you’re willing to pay $100 for a game that probably cost about $15 per unit to create. You’ll spend that extra $10 to buy a Blu-ray disc rather than a DVD, even though the cost to produce that Blu-ray is the same (and sometimes less) than it costs to produce a DVD.

Today’s production companies are doing the same thing. If a network comes back and says, “We’d like to continue this show, but the ratings are down, and we want to negotiate this licensing fee,” in the past, if that fee went below your profit threshold, you would say no, and the show was cancelled. These days, taking that loss with the network might be OK, because the bean counters tell you that you’ll recoup those losses in DVD and iTunes sales, and maybe even a syndication run on top of that.

It’s that loss-lead system that could help save shows like FRINGE. Since its move to Fridays, FRINGE has been struggling big time. Yet, FRINGE does well in DVD sales and iTunes sales. Throw in another season, and Warner Bros. Television — which produces the show — could make even more money by selling syndication packages. So Fox and Warner Bros. might be able to sit down and discuss a greatly reduced licensing fee that would generate potential losses for Warner Bros. short-term, but could end up with long-term profit through DVD, syndication and iTunes sales.

Direct costs aren’t the only thing to consider, either. A couple years ago, many fans were surprised that Fox picked up TERMINATOR: THE SARAH CONNOR CHRONICLES for a second season. The ratings were not great, and Fox did not seem pleased with it.

While Halcyon — which held the Terminator rights at the time — may not have anticipated making huge amounts of money in the DVD and iTunes market, they did see a huge benefit of keeping SARAH CONNOR on the air a little longer. Its film with Christian Bale, Terminator Salvation, was due out. And having a show like SARAH CONNOR could actually be a weekly marketing arm that could help indirectly promote this new movie.

At the same time, if the movie was successful, it could boost the television show, and maybe even allow Halcyon to move back into making a profit. So it cut the licensing fee for SARAH CONNOR significantly, took the loss, and hoped it would equal greater returns at the box office.

All of this has made predicting whether shows will go or stay much more complicated. There are no magic numbers. You can’t scientifically look at a show’s ratings and predict renewal or cancellation. Sure, there are some that are obvious — NCIS ain’t going anywhere for a long time, and neither is AMERICAN IDOL. But other shows like TRAFFIC LIGHT and PERFECT COUPLES are DOA.

If you want to get an inkling of what shows are staying, or what shows are going, you have to also understand this whole expanded market. Because even if money isn’t really to be made in a first-run airing on a network, it could be made elsewhere, and getting that network exposure might be worth the risk of taking a short-term financial loss as a production company to keep it in a timeslot, and simply make more money on it later.

Michael Hinman is the founder and site coordinator for Airlock Alpha and the entire Genre Nexus. He owns Nexus Media Group Inc., the parent corporation of the Genre Nexus. He’s a marketing consultant by day and a veteran print journalist. He lives in Tampa, Fla.