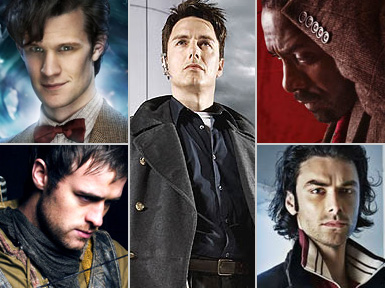 Last year, when I put together my annual top 10 list of TV shows for 2010, I noticed an unusual anomaly:  3 of the top 5 were British TV shows (DOCTOR WHO, SHERLOCK, LUTHER); and in 2011, it is likely that number will rise to 5 out of 5 with the return of TORCHWOOD and the introduction to DOWNTON ABBEY.

This is very curious since I have always been an avid fan of American television and thought I merely dabbled in my love affair with British television.  But looking over the past few years, there is a fascinating trend with British television, offering more than a handful of my favorite television shows.  As British television began moving across the pond, I have found myself enamored with includes such shows as:  MERLIN, PRIMEVAL, BEING HUMAN, ROBIN HOOD, HEX, SPOOKS (aka MI-5), LIFE ON MARS and THE SARAH JANE ADVENTURES – and clearly, I am not the only one.


Already, both BEING HUMAN and PRIMEVAL have been picked up to be remade as American series, and the British sensation TORCHWOOD was lured into relocating to the U.S. where it will now be broadcast on Starz.

Other recent British shows that have been making their way onto U.S. television (either for broadcast or as remakes) include:  SKINS, PRIME SUSPECT, OUTCASTS, SECRET DIARY OF A CALL GIRL, SURVIVORS, COUPLING, LAW & ORDER: U.K. and X-FACTOR.  Even the number one show in America for the past six years is a British remake.  As much as we would like to think that AMERICAN IDOL is a U.S. show, it is in fact a remake of the popular British television series POP IDOL.

So what is the secret behind this encroachment and rising popularity of British television amongst American audiences?  Is the attraction to something different and something new?  Or is it a refined appreciation for television shows that are simply set at a higher standard?  It is probably a combination of both.  Regardless of what the secret is, the effects can be seen all around.

Critics and fans alike cannot stop talking about these shows.  British television shows are what everyone is talking about as “water cooler” conversation.  Bring up any one of these shows and someone will have something to say.   Unlike other higher rated or even more popular shows, these are the shows that spark intellectual debate and an inordinate amount of curiosity.  They are also addictive.  Viewers who tune in find themselves unable to turn away.  There is an inherent captivating quality to these shows – whether it is the superb casting or remarkable dialogue weaved throughout the stories.

Talk to any American viewer of these shows and you’ll find a common ingredient: passion.  These shows inspire passion in ways that American television rarely does.  It stirs the depths of our very souls, haunting us and inspiring us.  They are telling stories in ways that stick with us long after we have gotten up off the sofa and turned off the television.   They compel us to find others who share the same passion and to revel in it together.

There is, after all, a reason that DOCTOR WHO is the longest running sci-fi show in television history – it is the passion of its fans that keep it on the air.  Generation after generation, it lures in new viewers and makes them fans for life.

Imagine that:  fans for life.  How many other shows can claim such a feat?  Most television shows have a shelf-life – a time period in which they rise up, draw an audience and then perhaps slowly fade away.  There are always exceptions, such as ER, which ran 15 years, and LAW & ORDER, which ran over two decades and still maintained their enormous popularity.  But what makes DOCTOR WHO more distinctive is that it has run twice times as long (48 years) and it continues to this day.  It feels timeless as a result.  In addition, parents continue to introduce their children to it – they feel it is a legacy to be passed on from generation to generation.  Many fans admit that it was their parents that first introduced them to the wonders of DOCTOR WHO, but how many can share that their parents felt as compelled to introduce them to ER or LAW & ORDER?

And it is not just with DOCTOR WHO.  There are many British television shows that are being passed along either from generation-to-generation or friend-to-friend.  I, myself, have bought a number of DVD sets for friends in the past few years to introduce them to the joys of British television.  I find it nearly criminal that such shows eluded their grasp, either by the constraints of their local television broadcaster or because they failed to heed my advice when I recommended such shows to them.  The most common remark I hear afterwards is:  “How did I miss this show?!”  Inevitably, they then find a way to receive British television or to pay more careful attention when I offer a recommendation.

Television shows should always be so glorious as to be viewed as a gift.  Each should feel like a rare artifact or a treasure to be showcased with pride in our homes.  What is remarkable is that so much of modern day British television fits within this category.  That they are making their way onto and beginning to dominate annual Top 10 lists, that they are the most talked about and addictive shows being aired, and that they inspire such passion amongst viewers – not only in their own country, but to captivate nations from across the globe — is astounding.  It is also tremendous fun.  After all, television is all about entertainment – it is designed to entice, captivate and enthral – and British television seems to have mastered this in spades. It is no wonder that more and more Americans are discovering and raving about it.  If you are not already a believer and addicted fan, then you too should discover what we are all talking about!