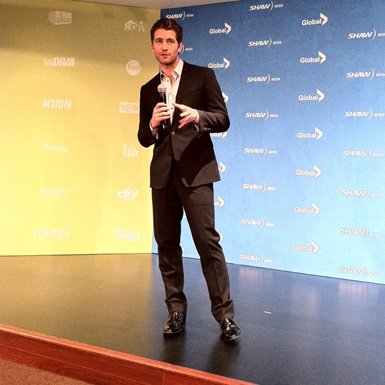 Were you one of the many GLEE fans who felt let down by the hit Fox show’s arguably uneven sophomore season? Did the de-emphasis on coherent and logical storytelling leave you to suspect that somewhat more care was going into picking and producing the incredibly lucrative songs for the show than the scripts? Well, consider those suspicions confirmed by none other the stars of the show themselves.

Evidently, the GLEE writers are quite literally making it up as they go along. At least according to Matthew Morrison (Mr. Schuester), Dot Marie Jones (Coach Beaste) and Iqbal Theba (Principal Figgins), who were on hand to help launch Global TV’s Fall Lineup at the Sony Center in Toronto on Tuesday.

“The show is written with only three writers and Ryan and them are so busy, they’re writing as we go and working their butts off,” admitted Dot Marie Jones when asked if she could shed any light on what may-or-may-not be in store for Coach Beiste next season. “Somedays they’d only finish three of the six acts — so when we’d get a script two days before we start working and you weren’t anywhere in there — you’d know you’re going to be in the episode, you’ll just get your lines sometime during the eight days we shoot a show.”

Added Matthew Morrison, “Literally, the end of the season, the season finale we just shot, they were handing us script pages, like, ‘Say this right here.’ The show is such an epic thing to film, we got so backed up. So I have no idea, I think the writers are taking a little break, and no one really knows anything.”

Luckily for GLEE Fans, not having an inkling of what’s going to happen next didn’t stop the actors from tossing out a few ideas of their very own.

Iqbal Theba, who has the dubious distinction of being the only cast member not to have sung yet would love a big Bollywood number and a first name other than ‘Principal,’ Dot Marie Jones is itching for a love interest, while Matthew Morrison has a handful of ideas up his sleeve.

“I think everybody wants the Will and Emma storyline to perk up a little bit. I also came up with this thing where Elton John would be Sue Sylvester’s new boyfriend, I think that would be hilarious,” said Morrison, who also revealed that Terri fans should not hold their breath for a reconciliation anytime soon. “I don’t make those decisions, but it doesn’t look very likely [that Jessalyn Gilsig will be back.]”