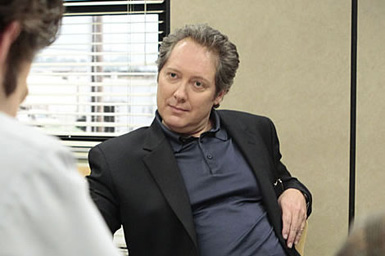 Were you one of a handful of loyal fans that was somewhat taken aback by the surprise announcement that James Spader had signed on to fill the sizeable void left by the dearly departed Steve Carell when THE OFFICE returns for its much anticipated eight season this Fall? Rest assured, you weren’t the only one.

“It sort of took me by surprise too,” admitted James Spader to the TV Addict during NBC’s recent Television Critics Association Press Tour Party in Los Angles. “I’d been in New York doing a new David Mamet play for a year and I was sort of trying to figure out what to do next and then all of a sudden I got a call from [OFFICE Executive Producers] Greg Daniels and Paul Lieberstein.”

As luck would have it, Spader had recently become acquainted with the talented twosome a while back to discuss what the actor characterized as general long terms plans for television not related to THE OFFICE. “They said we’ve written a small thing for you in the finale if you’d be interested in doing it, no obligation, we just would love to have you come and fool around for a bit,” explained Spader. “It seemed very funny and they had a bunch of other interesting people doing it and the episode turned out well.”

Actually, the episode turned out a little better than well. Said Spader, “I never really considered whether I would do more [episodes] then all of a suddenly they [Daniels and Lieberstein] called me back again and said we’d really sort of like your character to come back in some capacity. And we start talking about that and here we are.”

Expected to appear in 15 episodes during THE OFFICE’s eighth season, Spader will reprise the character fans were introduced to in the season finale… but with a twist. Rather than be put in the unenviable position that would see Spader step into Steve Carell’s fairly lofty shoes, the Producers have cleverly decided to take a different approach by having the multiple-Emmy-winning actor replace Kathy Bates, who conveniently enough is otherwise occupied on her hit NBC series HARRY’s LAW, as CEO. A CEO who, much to the chagrin of the denizens of Dunder Mifflin, is most assuredly is a little more hands on then his predecessor.

“He’s not as concerned about being loved. He’s very different and brings with him a very different energy. I don’t know a great deal about how Michael Scott functioned within the office but Robert Calironia, the character I play is not so concerned with how loved he is,” revealed Spader. “We just started shooting and right now he’s sort of doing what I’m doing, getting to know the office, all the people and trying to figure out how to make it all work.”

New episodes of THE OFFICE return to NBC this Thursday September 22nd on NBC. Catch up on past episodes you may have missed for free online at clicktowatch.tv