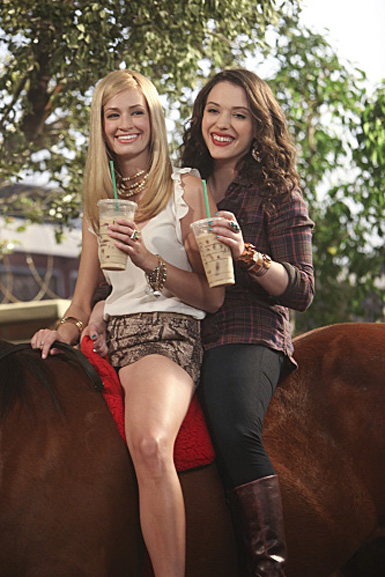 Spoiler Alert Much! Or at least that’s what your very own TV Addict was left thinking following what we can’t help believe was a far too revealing interview with REVENGE creator/executive producer Mike Kelly over at EW.com. Now don’t get us wrong, after the disappointments of such serialized shows like THE EVENT, FLASHFORWARD and countless other LOST clones, we can completely appreciation that viewers want to know that showrunners first and foremost have a plan. Unfortunately, what we don’t know want to know, is the precise nature of said plan! Which is exactly why we’re left scratching our head following Kelly’s recent interview that effectively removed much of the suspense surrounding REVENGE’s next 12 episodes by revealing this.

Note to any and all current and future TV showrunners: Last night’s 2 BROKE GIRLS was the perfect example of how not to attract an audience to your fledgling new series. No really. In what universe did the proverbial powers that be think it would be a good idea to take the best two things about their show — which in the case of this CBS laugher are stars Kat Dennings and Beth Behrs — and both literally and figuratively slather them in sh*t! Not only was the poorly thought out gross-out gag involving Behrs’ pet horse incredibly unfunny, it had us thisclose to changing the channel. Suffice it to say, all parties involved, including Dennings, Behrs, that poor horse and the tourism board of Brooklyn deserve better.

As much as we enjoyed last night’s CASTLE, which thanks to a super (!) case-of-the-week brought out everything we love about the series (Read: Humor, romance and cases that are relevant to Castle and Beckett’s current predicament), there is one teensy little thing that bugged us. That thing? The fact that no one in the Precinct could be bothered to bring up any of the life-changing events that went down during last week’s season opener. Yes, we get that the show is procedural in nature and understand full well that much of CASTLE’s success may-or-may-not be attributed to the 15 or 20 million DANCING WITH THE STARS fans who need to be able to tune into an episode on any given Monday and not have to think. That said, it’s both insulting and infuriating to those of us regular viewers that the writers couldn’t have found a way to throw in a line or two alluding to the Beckett being back at the top of her game following a shocking shooting that almost took her life. We’re just sayin’

While the optimistic side of us wants to applaud the 7 or 8 million Americans who didn’t return for last night’s second helping of CBS’ new-but-not-so-much-improved version of TWO AND A HALF MEN, the larger more cynical side of us is still left wondering what 20 million of you are thinking?!