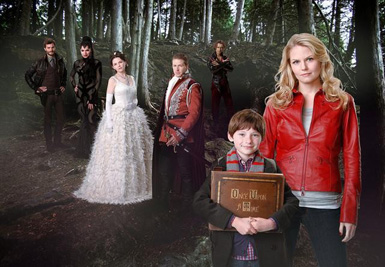 11:15AM: The pilot screening of ONCE UPON A TIME concludes to the tune of a very enthusiastic response from a respectable-sized audience at New York Comic Con 2011 while creators and executive producers Adam Horowitz and Edward Kitsis take to the stage for a brief Q&A moderated by the always informative Matt “TVLine” Mitovich.

11:17AM: LOST fans will be pleased to discover that the talented twosome of Kitsis and Horowitz — who in case you didn’t know spent the last six years honing their craft under LOSTerminds Damon Lindefof and Carlton Cuse — have littered the series premiere with LOST related easter-eggs. Joked Kitsis, “We can’t help ourselves!”

11:18AM: Similar to that of LOST, the structure of ONCE UPON A TIME will focus on telling the story of one character per episode, with upcoming episodes revolving around the Evil Queen’s side of the story, the origins of Snow and Charming’s relationship, and how Rumpelstiltskin came to be.

11:22AM: The idea for ONCE UPON A TIME was something that Kitsis and Horotiwz had been thinking about since their time on FELICITY came to an end, but it wasn’t until their time on LOST ended that they figured out how to properly turn it into a weekly television series.

11:23AM: Upcoming Guest Stars include Jessy Schram (FALLING SKIES) as Cinderella, Emma Caulfield (BUFFY THE VAMPIRE SLAYER) as the Blind Witch, Giancarlo Esposito (BREAKING BAD) as the Magic Mirror and Alan Dale (LOST) as Prince Charming’s father. Potential upcoming Guest Stars include Lady Gaga! No, really. According to Kitsis, the writers wanted Lady Gaga to play the Blue Fairy that appears for a brief, albeit integral scene in the Pilot. So much so that they actually got the head of ABC Music to put in an inquiry with Gaga’s manager. Note to Gaga: The invitation stands.

11:24AM: According to Horowitz, ABC’s corporate overlord Disney has been very open with regards to which iconic fairytale characters can be used on the show. Unless — as moderator Matt Mitovich pointed out — they’re planning on impaling Dopey!

11:25AM: For any and all TV Addicts who may-or-may-not be slightly apprehensive about jumping on board a show that requires a PhD in TV mythology, Kitsis has two words for you: Don’t be! “The episodes are much more self-contained than we thought they’d be,” revealed Kitsis. “Yes, there is a mythology to the show, but Adam and I didn’t want to do a series where the entire first season is based around the first five minutes of the Pilot.”

11:26AM: If LOST was about redemption, ONCE UPON A TIME is about hope.

11:28AM: “I think it’s all about who is making the show,” said Horowitz when asked how ONCE UPON A TIME compares to GRIMM, NBC’s upcoming new fairytale-infused series. “Eddie [Kitsis] and I have our own point of view so whatever we’re going to write or create — for better or worse — will be uniquely us.”

11:29AM: Cue obligatory “endgame” question! “We have very big ideas as to where we’d like to end up and where the show will go,” admitted Horowitz when asked if they have an ultimate plan for the series. “But right now we’ve been given 13 episodes are our goal is to do the best 13.” Added Kitsis, “I don’t know if a network will ever be dumb enough to give us an hour of television ever again. Six years of LOST was one thing, but we’re starting over with this show and we know we have to earn it [a full season].