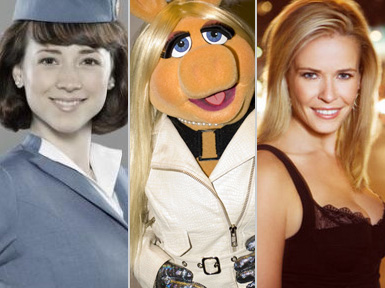 Lamest Twist: The only thing shocking about Sunday’s “big reveal” on DEXTER was that nobody on the writing staff had the foresight to realize how ridiculously predictable it was.

Biggest Conflict: Despite our general disdain for shameless product placements, the hilarious and heartfelt way in which PARKS AND RECREATION continues to handle Ben and Leslie’s relationship has earned the show a pass on Thursday’s not-so-subtle advertisement for the “Li’l Sebastian Plush.” Well, that and we really really want one.

Quote Of The Week: “”Talking strategy with Brandon is like talking to you about shirts that aren’t blue,” said SURVIVOR’s Cochran to the show’s fashion-challenged host, Jeff Probst. “He just doesn’t comprehend it.”

You Know You’re In Trouble When (Special CW Network Edition)…: Wednesday’s repeat airing of A MUPPETS CHRISTMAS: LETTERS TO SANTA didn’t just outdraw virtually all of your Network’s offerings, it had us wondering if Miss Piggy’s agent would be receptive to a guest arc on GOSSIP GIRL.

Weirdest Partnership: So apparently, K-Mart is ditching its squeaky-clean image by partnering with, of all people, JERSEY SHORE’s JWoww, who launched her new scent this week. Smells like desperation on both their parts to us.

This Week In “Stick a Fork In It” Moments: Even the delightful NEWSRADIO alum that is Maura Tierney couldn’t save THE OFFICE from another disappointing outing. Seriously. Does anyone else remember when this show used to make us laugh?

Why The Geek In Your Life Is Making His O-Face: Spike-TV announced that Zachary Levi of CHUCK — a show that has managed to survive despite being scene by fewer people than are in the Kardashian clan — will host the Video Game Awards.

Lamest PR Strategy: After actress Karine Vanasse tweeted that PAN AM had been canceled, ABC Publicity boldly attempted to convince all seventeen of the show’s viewers that the Network’s decision to only shoot 13 episodes still has the show in contention for a second season. Oh, and if you believe that, there’s a bridge in Brooklyn you might be interested in.

Why Babysitting Isn’t As Profitable As It Once Was: According to the folks at Nielsen, more pre-teens than ever are being plunked down in front of the tube for longer periods of time. Why pay Susie down the block when Nickelodeon is free?

Biggest Mystery: DOCTOR WHO fans were upset to learn that the BBC wouldn’t be showing a Christmas episode of DOCTOR WHO CONFIDENTIAL. But whether or not said episode actually exists depends on whom you speak to…

Reason #423 We’d Hate to Be an NBC Executive Right Now: Chelsea Handler’s guest appearance on Thursday’s WHITNEY did nothing to boost the struggling freshman shows ratings. Well, except wonder just how interested audiences are going to be in her semi-autobiographical NBC series ARE YOU THERE, CHELSEA? which is scheduled to premiere in January.

This Week’s Sign The Apocalypse Is Nigh: Dough Hutchinson and his teenage bride, Courtney Stodden, have been making videos for VH-1, indicating a reality show won’t be far behind.

Unwinnable Battle: As Kris Humphries filed for annulment, Kim Kardashian continued insisting their blink-and-you-missed-it marriage wasn’t a fraud. A sham, however… well, that’s another story. Or at least a different word.

Newsman We’d Most Like To Hang Out With: You just get the sense that NBC’s Brian Williams is a surprisingly cool dude despite that whole “Voice Of God” thing.

The “Is Anyone Seriously Surprised?” Award Goes To… : JERSEY SHORE meathead Vinny, who had to apologize for posting a song in which he rapped about pretending to rape strippers. Because normally, that kind of tastelessness is reserved for castmates Pauly D or The Situation.

Least-Missed Show: Comedy Central announced that SOUTH PARK would return on March 14… prompting some to say of the wildly-prolific show, “Wait… you mean it went away?”

Two Thumbs Down: Due to lack of sponsors, Roger Ebert announced that AT THE MOVIES would be going on hiatus.