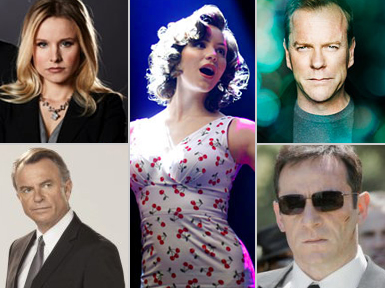 SMASH
What do you get when you combine the Producing prowess of Chicago’s Craig Zadan and Neil Meron, the musical stylings of songwriters Marc Shaiman and Scott Wittman (Hairspray) and the singing/acting chops of the likes of Debra Messing, Brian D’Arcy James, Christian Borle, Katharine McPhee, Jack Davenport and Anjelica Huston? In short: An absolutely electrifying pilot that has easily earned SMASH the distinction of being heralded as our our most anticipated show of 2012. [Premieres Monday February 6th on NBC, CTV in Canada]

AWAKE
How does LONE STAR creator Kyle Killen follow up one of the best reviewed flops in recent television history? Well, if his latest project is any indication, by doubling down! No really. Clearly not content to tone down his penchant for complex storytelling for a Network audience, AWAKE will attempt to tell the tale of a police detective (Jason Isaacs) who — as the title suggests — awakens in two very different realities following a horrific car accident. The catch? One reality is where only his wife survived and the other is where his son did. And while we don’t pretend to know how this engrossing tale will play out, or what effect — if any — the recently reported behind-the-scenes struggles will affect the show, of this we are sure: Having watched and re-watched the pilot more times than we care to admit, we can’t wait to find out what happens next. [Premiere TBD]

TOUCH
If the first season of HEROES illustrated anything, it’s that creator Tim Kring knows a thing or two about building a series around ordinary people discovering that they have extraordinary abilities. So you can only imagine our excitement surrounding his latest project that features the likes of Kiefer Sutherland discovering that his mute son’s gift with numbers may be more than meets the eye. Adding to our excitement, the supporting cast that includes Danny Glover and UNDERCOVERS alum Gugu Mbatha-Raw. [Special Sneak Peek Monday January 25th on Fox, GlobalTV in Canada]

HOUSE OF LIES
Assuming of course you miss VERONICA MARS as much as we here at theTVaddict.com do, the only thing you really need to know about Showtime’s newest series that centers around a whip smart team of MBA-toting management consultants that according to a Network press release are “playing America’s 1 percent for everything they’ve got” is that it marks Kristen Bell’s much-anticipated return to the small screen. What’s that you say… you’re not familiar with the best thing to happen to female sleuthing since Nancy Drew? Well, do yourself a favor, check out Ms. Mars in action (Trust us, you’ll thanks us later) and mark you calendars for January 8th, when Showtime unspools the coolest cast of morally dubious characters — including Don Cheadle and Ben Schwartz (PARKS AND RECREATION’s Jean-Ralphio) — since that gang from Oceans 11 thru 13. [Premieres Sunday January 8th on Showtime, TMN in Canada]

ALCATRAZ
Where J.J. Abrams leads, this TV Addict follows. Especially if the destination is one of the country’s most mysterious and storied Prisons that just so happened to have housed a collection of the country’s most notorious and dangerous criminals who may-or-may-not have been part of some top secret government experiment involving time travel, Sam Neill, Jorge Garcia and Robert Forster. [Premieres Monday January 16th on Fox, CityTV in Canada]