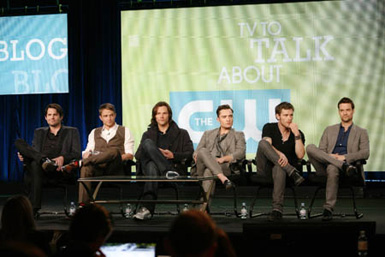 3:05PM: “For the moment he has tunnel vision and a one track mind to get his girl Blair Waldorf,” says Ed Westwick when asked if he misses playing up Chuck’s devious side. “So hopefully we do see his devious side, the devil within.” Interjects RINGER star Kristoffer Polaha, “Wait a second, you’re British?”

3:09PM: Rather than answer a question about what’s in store for Sam in the second half of SUPERNATURAL’s seventh season, Padalecki jokes that he’s distracted by the enormous photo of a shirtless HART OF DIXIE star Wilson Bethel that is currently being projected on the screens within the hotel ballroom.

3:11PM: “I was shocked,” says Kristoffer Polaha, referencing not so much the shocking turn of events during RINGER’s midseason finale, but rather his inclusion on this “Bad-Ass” panel.

3:12PM: Does THE VAMPIRE DIARIES’ Joseph Morgan ever worry that his character of Klaus might become too soft to remain on the show? “Yes, I do worry about the writer’s making him softer or too good,” admits Morgan. “But I think they can make him more human and relatable without taking away any of his bad-assness. I think it’s possible to be somewhat of a relatable anti-hero while still tearing out hearts and breaking necks.”

3:14PM: “I’m faking it,” says a half-joking Shane West when asked about the bad-ass fighting skills he brings to NIKITA.” Maggie [Q] is kind of a phenom, it’s just embarrassing how good she is at what she does so you kind of have to live up to those expectations. I spend a lot of time in the gym and at the gun range.”

3:15PM: “I’m pretty confident that it will be a bad sign for my career when they tell me to stop taking off my shirt,” says HART OF DIXIE star Wilson Bethel when asked if he expects to take off his shirt each and every episode. “I’ll take it that my time on the CW is short-lived. Thankfully, they told me to take the cowboy hat off which I don’t think was my look.” 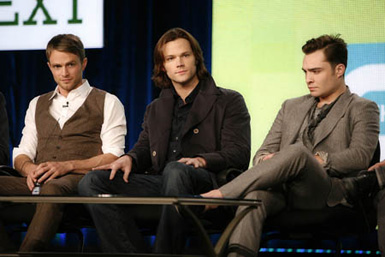 3:16PM: Just where will Klaus’ soon-to-be-introduced brothers fall on the scale of bad-assness? Reveals Morgan, “They’re doing well, they’ve started to master the heart-pulling-out and neck-breaking but they haven’t been around for a few 100 years so they have a lot to learn about coming into the modern world.”

3:17PM: On what they like most about the characters? Following the original NIKITA film and television show, West is honored to get to take on that lore. Morgan relishes the sociopathic nature of the character and the idea that Klaus can be in a room and you never know what he’s going to do, “he could kiss or kill you.” Ed Westwick enjoys the money, “My character’s incredibly wealthy and money can get you into a lot of trouble which makes for some interesting shorelines.” Padalecki loves the hair, before adding on a more serious note that he loves that SUPERNATURAL has no boundaries. “I’ve died, gone to hell, been Lucifer, (Interjects Westwick, “I need to tune in!”). We’ve done everything, played different versions of ourselves and we have such a forgiving fan base. We do anything and they go with it.” HART OF DIXIE’s Wilson Bethel calls his character so much fun. While Polaha loves RINGER’s twists and turns.

3:22PM: When asked who they in real-life consider to be bad-ass, the discussion goes a wee bit off the rails:
Morgan: “Gordon Ramsay is pretty bad-ass.”
Padalecki: “Gordon Ramsay?”
Westwick: “I’m english and I don’t agree.”
Padalecki: “Paula Deen is more bad-ass than Gordon Ramsay! I hope this doesn’t sound like a pat answer, but I got to say our soldiers keeping us safe around the world.”
Morgan: “Now I feel like an idiot!”
Polaha: “I was going to say Tim Tebow, but then he brought up soldiers.”
Padalecki: “Not Tony Romo right now, I’m sorry, I’m a Cowboys fan.”
West: “For me growing up, one of the bad-asses that I liked was Michael Biehn. Terminator, Aliens, The Abyss, that guy was a man.”

3:25PM: Padalecki believes his co-star Jensen Ackles should be on the “Bad-Ass Boys of the CW” panel, and would be, except that he’s busy working. Said Padalecki, “I’m here representing the both of us.” Adds Polaha, “But who would win in a fight?” Counters Padalecki, “Well, seeing as though he’s not here to defend himself… I’d totally kick his ass!” Jokes Bethel pointing to the door, “Ladies and gentlemen, Jensen Ackles.”

3:26PM: Morgan says Stefan (Paul Wesley) is perhaps a little bit more bad-ass than Damon at this point in the season. Also gives Daniel Gillies a shout-out claiming, “The whole throwing coins through windows, that was a neat trick.”

3:28PM: The panel’s “Awwwww” moment came in the form of Padalecki talking about his impending fatherhood. “I’m very excited, I hope it doesn’t bleed over to my work because I have a boyish excitement about it. I’m almost worried about it like I should be more nervous.”

3:30PM: Polaha takes out his wallet and puts $20 dollars on the table for the panelist who can use the word “Bad-ass” the most in answering the next question pertaining to which of them has the most bad-ass show.
Westwick: ” I get to shoot in New York which is the most bad-ass city in the world. Plus, I live in Brooklyn which is pretty bad-ass.”
Padalecki: “I get to play this action hero, fight for what’s right and every day get to do what I love so I think that’s pretty bad-ass.”
West: “NIKITA is based around that. The entire show is bad-ass. Action, guns, cars, stunts, it’s like being a kid again. A bad-ass kid.”
Morgan: “I came into the show late and what was so bad-ass for me was on a personal note how everyone just completely welcomed me into the fold. There is no reason why I needed to stay on the show past the initial four episodes, but we’re all like a big dysfunctional family and that’s why I love it.”

3:33PM:. When asked to recount a story of bad-assness in their real lives, Westwick says, “My criminal record is available online.” While Polaha recounts a crazy childhood story about his nine-year old self, some friends and a handful of leftover fireworks. Said Polaha, “I’m a reformed bad-ass and have been so for a long time.” Says Padalecki, “I always had the opposite definition, I always thought being a bad-ass was doing the right thing.” Jokes Bethel, “I was a bad-ass when I went to Church last Sunday! Bad-ass!”

3:37PM: After a journalist inadvertently outs Bethel as a poet (Fun Fact: He used to publish a literary magazine), Bethel attempts to reclaim his bad-assness by saying, “I only write poetry while I’m riding my motorcycle, smoking weed and chasing rattlesnakes!” 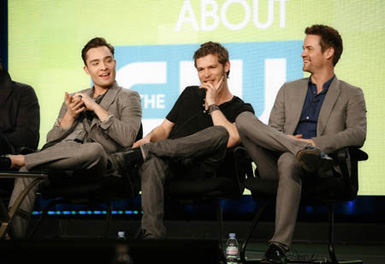 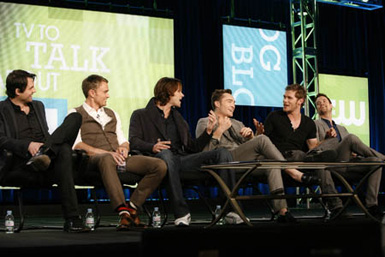 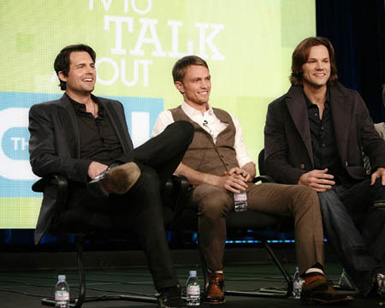 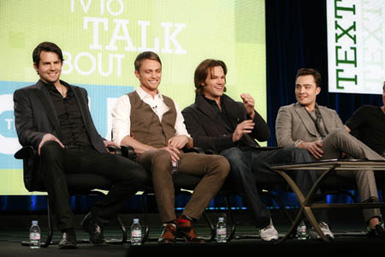 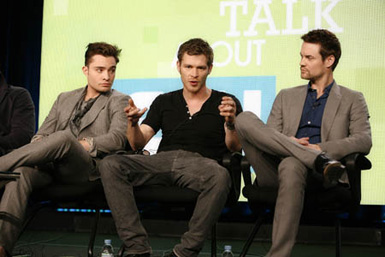