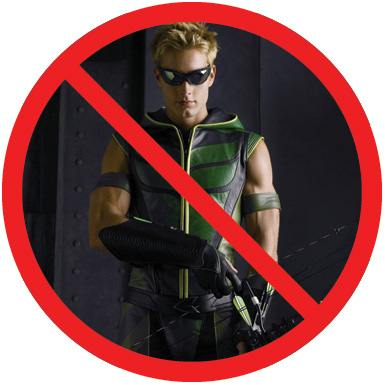 Attention SMALLVILLE fans who have been patiently waiting for the CW to come to their senses and simply hand over the titular role in their proposed [GREEN] ARROW reboot to heir apparent Justin Hartley: Don’t hold your breath! Or at least that was our main takeaway after getting a glimpse of a just released casting breakdown that mysteriously found its way into our inbox late last night.

What’s more, since we’ve always been a big proponent of the old adage “if you can’t beat ’em, join ’em,” we thought rather than continue to bemoan what we can’t control, we’d have a little fun by choosing our dream cast for what sure looks to be shaping up to be a fantastic reboot. See for yourself, after the jump.

OLIVER QUEEN
What They’re Looking For: A 27 year old reformed bad boy, who after having spent five years shipwrecked on a tiny, brutally dangerous island in the South China Sea returns to town a different man. Or to be more specific, a tortured, thoughtful master of the bow with a ferocious determination to make a difference.
Who We’re Pitching: Chris Carmack (THE OC), Rafi Gavron (LIFE UNEXPECTED), Christopher Egan (KINGS), Michael Graziadei (AMERICAN HORROR STORY)

DINAH “LAUREL” LANCE
What They’re Looking For: 28 years old, smart sexy, Laurel is a legal aid attorney determined to use her life as a one-woman war against the 1% following the death of her younger sister Sara. A sister, who as luck would have it, just so happened to have died aboard Oliver’s yacht.
Who We’re Pitching: Tina Majorino (VERONICA MARS), Lindsey Shaw (10 THINGS I HATE ABOUT YOU), Allison Miller (TERRA NOVA), Jurnee Smollett (FRIDAY NIGHT LIGHTS)

MOIRA QUEEN
What They’re Looking For: 48 years old, a beautiful woman, Oliver’s mother Moira is a very wealthy woman who is not used to being shaken. Having remarried during the five years that former husband Robert and Oliver were both presumed dead, Moira has had free rein over the Queen billions. Not surprisingly, she’s deeply interested in learning whether or not Robert will also return unexpectedly, to ruin her present marriage and go over the books with a fine-tooth comb.
Who We’re Pitching: Lena Olin (ALIAS), Dana Delany (BODY OF PROOF), Susanna Thompson (KINGS), Rena Sofer (HEROES), Carrie-Anne Moss (CHUCK)

JOHN DIGGLE
What They’re Looking For: 35 years old, African-American, Diggle is really, really big, a former military man who served with the Army Rangers in Afghanistan, and has been a bodyguard for hire for the last four years. Hired by Moira to be Oliver’s chauffeur and protector, Diggle soon finds he is trapped in a battle of wits, as Oliver repeatedly eludes his protection. But in fact, Diggle’s primary conflict is one of loyalty — he has to show that he’s working for Oliver, not Moira, before Oliver will give him a smidgen of trust.
Who We’re Pitching: Sean Blackmore (GENERAL HOSPITAL), J.R. Martinez (DANCING WITH THE STARS), Harry Lennix (DOLLHOUSE), Richard T. Jones (TERMINATOR: THE SARAH CONNOR CHRONICLES)

THEA QUEEN
What They’re Looking For: 17 years old (suggest 17-22 years), Oliver’s Lolita-esque sister, Thea was a 12 year old girl when he went on his infamous yachting voyage — but now she’s a celebutante who’s testing the boundaries of acceptable behavior. Thea loved her big brother with all her heart, and is delighted to have him back in her life — but she’s spreading her wings, and is unprepared for Oliver to become the Bad Cop in the family, restricting her access to boys and drugs.
Who We’re Pitching: Annie Clark (DEGRASSI)