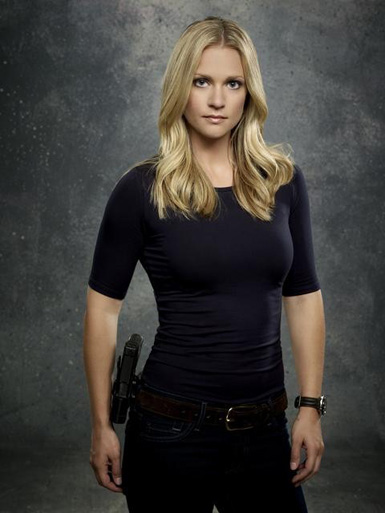 As CRIMINAL MINDS gears up for its 150th episode tonight on CBS (CTV 2 in Canada), we here at theTVaddict.com thought fans might appreciate getting to spend a little more one-on-one time with a key ingredient to the show’s astounding success. Which is why, when given the opportunity to chat with star AJ Cook yesterday — whose character of media liaison turned profiler JJ Jareau is responsible for having taken fans on quite an interesting journey over the course of the show’s 150 episodes — we jumped at the chance. The result, a handful of snappy answers to some silly questions that may-or-may-not reveal the CRIMINAL MINDS cast member guilty of spending far too much time scarfing down grilled cheese sandwiches at Craft Services. But hey, don’t take our word for it — find out for yourself which member of the BAU is most likely to ruin a take by making AJ Cook laugh — after the jump.

After 127 spend playing the same character, what keeps you excited about waking up and going to work every morning?
AJ Cook: Well this season in particular I feel like it’s a new show. We went through a bunch of changes and in a way it was a blessing in disguise because it gave us the creative license to change things and to try different things with these characters.

What’s your favorite thing about the new and improved JJ Jareau?
My character gets to be much more physical now and it’s super fun. Anytime I get to do stunts and run around and shoot a gun is a good day in my books.

Looking back on 150 episodes, who is the scariest baddie the team’s had to track down?
I think probably “The Reaper” which was the serial killer that was stalking Hotch’s family and eventually killed [ex-wife] Haley. That character was pretty top shelf crazy and I think because it stretched over so many episodes and was such a pivotal storyline it was just huge.

If JJ could crossover to any other cop show on television which one would you choose?
I’d do DEXTER! That would be an interesting crossover. I love the show and as someone who is on a crime procedural it’s cool to watch a show on Showtime where there are no boundaries and they can just take it to an entirely different level. Plus, it’s funny, and I love the underlying comedy of the show.

Speaking of comedy, we ere hoping to give fans a peek behind the curtain in terms of what life is like on the set when the camera’s aren’t rolling. When you’re rehearsing a scene, which of your co-stars is most likely to be the one to make you crack up?
Let’s see. I’d say Matthew [Matthew Gray Gubler] because he’ll unintentionally do something like say a line in a weird way — almost as if he just went through puberty — his voice will crack and I just can’t help myself. But everyone’s so funny on set and we’re always making each other laugh because we all know each other so well. Anything goes, some of the things we talk about… [trailing off]

Which actor is most likely to be found eating at Craft Services when you’re not shooting a scene?
Hmmmm… Well it depends, if Shemar [Moore] is doing one of his cleanses, than well no. But if he’s not, I swear that guy will have like two bags of Cheetos I hate him! I’m always like, “How do you eat that and look like that?!” It’s not fair, I think I say that to him everyday.

Coolest celebrity encounter?
I love Brad Pitt — I was obsessed with Legends of the Fall growing up — I had a cheesy poster on my bedroom wall, but I haven’t met him. I did get the chance to meet Claire Danes though, who was my idol growing up and I’m pretty sure I even told her that! I was such a nerd, I totally nerded out, like “You’re the reason why I became an actress” She was so sweet, that was a big moment.

Aside from CRIMINAL MINDS of course, what are you loving on television right now?
HOMELAND was incredible. Love, love, loved it. And I don’t really watch reality TV but the one show I do watch — which isn’t really reality — is SO YOU THINK YOU CAN DANCE. I’m obsessed with it. They’re just so talented. I grew up dancing and I just really appreciate the technique and skill of these incredible dancers. I watch them longingly thinking, “Oh, I used to be able to do that.”

Any chance we might see you on DANCING WITH THE STARS?
Probably not. I mean power to the people that do and I think it’s incredible what they can accomplish in such a short time span, but probably not. I didn’t do ballroom.

What would you say is the show you’re most embarrassed about watching?
My guilty pleasure is just the Food Network, but that’s not embarrassing enough. Let me think here, does THE RACHEL ZOE PROJECT count? If this show’s on I’ll kind of watch it, but only when my husband’s not around because he’ll kind of make fun of me.

CRIMINAL MINDS airs Wednesday at 9PM on CBS (CTV 2 in Canada) and stars Thomas Gibson, Shemar Moore, Joe Mantegna, Matthew Gray Gubler, Kersten Vangsness, Paget Brewster and A.J. Cook. Catch up on past episodes you may have missed for free online at clicktowatch.tv