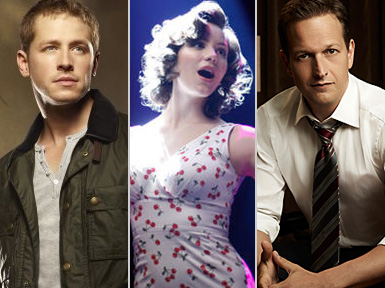 Cannot wait for Sunday’s return of THE GOOD WIFE. Now that Will Gardner’s legal career seems to be back on track is there any hope at all for a rekindling of his relationship with Alicia? — Brandon
The TV Addict: We hate to be the bearer of bad news, but at what point exactly did it become clear that Will’s professional problems are over? Oh sure, Wendy Scott Carr’s witch-hunt may have wrapped up, but as this Sunday’s episode clearly illustrates, Will isn’t quite out of the woods just yet. What’s more, fans can expect the fiasco that was the failure of Wendy Scott Carr’s investigation to have serious repercussions for both Lockhart Gardner and Peter Florrick’s State Attorney’s Office in terms of personal. Seriously surprising ones that we did not in a million years see coming.

I miss the old Alicia and Kalinda. Do you think there is any chance my two favorite female friends will ever be able to look past the ugliness of the first half of this season? — Amy
The TV Addict: Oddly enough, we’ve got some good news on the Alicia and Kalinda front. It would appear that there is a light at the end of the tunnel. Or at least that’s our prediction based on a case that Alicia has been asked to handle that seems to set the table for a frenaissance in a future episode. Stay tuned.

DEGRASSI scoop please. — Lindsey
The TV Addict: As we are wont to do anytime we get a plea for intel on what trials and tribulations those maniacal DEGRASSI writers plan on putting your favorite student body through when the hit Canadian export returns next Friday February 24th, we sent out a quick feeler to our source on the set. Their response, “Expect a life-changing accident!” Read into that what you will.

More excited for the CW’s SEX AND THE CITY prequel that I probably care to admit. Any idea as to the type of besties the writers plan on surrounding a high school aged Carrie with? — Vanessa
The TV Addict: Quick! What is the one thing every wannabe fashion-icon needs growing up? Answer: No, not a Gucci purse or pair of Manolo Blahniks (Okay, that helps) but rather a gay best friend! As such, producers are currently on the look out for Walt, who is described as a handsome, preppy, smart, stylish and funny best friend with one teensy little catch. Unlike Willie Garson’s Stanford Blatch, he may-or-may-not exactly have come to terms with sexuality just yet.

In accordance with Sunday’s off-the-hook episode of ONCE UPON A TIME, I have one quick question in the form of three simple words: WHAT HAPPENS NEXT! — Dillon
The TV Addict: A whole heck of a lot! But rather than spoil all of the fun, let’s just say that Storybooke Maine is very quickly giving Wisteria Lane’s Fairview a run for its money in the most dangerous town to live in department. Case in point, the upcoming March 4th episode of ONCE that will see Sheriff Emma’s case-of-the-week involve the mysterious disappearance of David’s wife Kathryn. Fingers crossed Mary Margaret has a good alibi!

Emilie de Ravin was pretty much the perfect casting choice to play Belle on ONCE UPON A TIME. That being said, curious as to what familiar fairytale faces we can expect to see next? — Jay
The TV Addict: Seven or eight little ones in the form of Grumpy, Doc, Sneezy, Sleepy, Dopey, Happy, Bashful, Bossy, Watchy. And no, we didn’t just make that last one up in an attempt to turn one of Disney’s iconic dwarfs into a TV Addict. We swear.

Any SUPERNATURAL scoop? — Jess
The TV Addict: Entitled “Of Grave Importance,” SUPERNATURAL’s 19th episode of the season will introduce an attractive old flame of Sam and Dean’s who in typical scary fashion is a hunter of sorts.

A recent tweet of yours left me with the sneaking suspicion that you know the identity of Julie’s baby-daddy on DESPERATE HOUSEWIVES. Spill! — Willa
The TV Addict: Seeing as though we hate to be the guy who spoils all of the surprises those hardworking scribes over at DESPERATE HOUSEWIVES have up their sleeves, we’ll simply leave it at this: The lucky (or is it unlucky?) baby-daddy-to-be lives — as luck would have it — across the street from Susan. Which, if we remember our Wisteria Lane geography, would plant him firmly in Lynette’s already over-crowded house.

Any word in how 90210 plans on ending the season? — Candice
The TV Addict: Since we’re not even going to pretend we’re still watching a series that has sullied the good memories of an original series responsible for our TV Addiction, all we feel comfortable doing is painting you a somewhat ambiguous picture of what will go down in the upcoming season (series?) finale by sharing this little bit of scoop. Producers are currently casting for a cop, investor, a nurse, a photographer and a nun for what promises to be a truly bizarre end to the season.

As a staunch supporter on “Team Karen” I simply must know what is to happen to poor Katharine McPhee now that Ivy Lynn (Megan Hilty) has been cast as Marilyn on SMASH? — Lisa
The TV Addict: Good News: Katharine McPhee’s Karen isn’t going anywhere. Well actually, she is, but it’s at the behest of the show’s Producers who decide to reward Karen for all of her hard work with a consolation role in the ensemble. Bad News: The ensemble, who have so clearly been on “Team Ivy” from day one do not take kindly to newcomers. Worse News: You’ll have to wait until SMASH’s fantastic fourth episode of the season to see how all of this plays out.