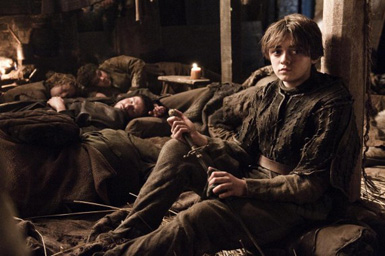 I’m not gonna lie: I had no interest in GAME OF THRONES, and didn’t watch it during the first season. As with many shows, I eventually discovered it one night when, too drunk to figure out how to work our ridiculously complicated remote control, an episode came on. As fate would have it, that episode was a rerun of the pilot and long before I had sobered up, I was hooked. Why did no one tell me it was a soap? And not only that, but the best soap on television. Now, I won’t even pretend that I can remember (let alone spell) half their names, and I’m a tad too tired as I write this to actually go to IMDB, but the story in which the hot no-longer-caged dude told girl-pretending-to-be-a-boy that he would repay her kindness by killing any three people she wished (and proved it by episode’s end by striking down the first guy on her list) is brilliant. I have to assume that nasty little twit Joffrey will wind up as No. 1 with a bullet (or, in this case, a sword) on her list. Meanwhile, the show continues to prove that no character is sacred (let alone safe) by killing off Renley via the smoke monster that sprung forth from the redheaded witch’s vajayjay. Something tells me that unlike on a daytime soap, the THRONES folks — no matter how popular — won’t be popping up in a few weeks to say, “Whoopsie! Sorry y’all invested in a story about my death. Let’s just pretend that never happened, shall we?”

Anybody else wonder if the folks at GOSSIP GIRL recently held a screening of my favorite trashy miniseries of all time, LACE and it’s sequel, cleverly titled LACE 2? First, Chuck was running around town declaring, “Which one of you bitches is my mother?” ala Phoebe Cates in the classic. Fans of the mini will remember that the sequel found our heroine revamping that line to ask, “Help me find out which one of those bastards is my father!” Meanwhile, Serena’s attempt to steal Diana’s book was downright hysterical… but not in a good way. How the heck did she think that was going to end? And has anybody else noticed that for a dude who wrote what amounts to a trashy tell-all, Dan gets an awful lot of high-brow offers? If that’s all it takes to be famous, I’m gonna need the people in my life to start doing some way more interesting things so I can write about them!

Finally, RUPAUL’S DRAG RACE got one right! Tyra was a vapid, lazy, rude, unpolished little beyotch, and I never got how Raja, who never even attempts to look like anything other than a man in a dress, walked away with last year’s title. But Sharon Needles? Yup, I can live with that… even if, truth be told, I thought Chad Michaels truly deserved the crown. The best moment of the reunion show for me? Seeing that nasty little queen Phi Phi called out for her bad behavior… and then kinda thrown under the bus by his own mama!

For a while now, I’ve wanted to see the girls of THE BIG BANG THEORY — Penny, Bernadette and Amy — get their own spin-off. But then I realized that without them, the guys would flounder in what has become (when the ladies aren’t around) an increasingly one-note show. The guys still manage to make us laugh, but it’s a “Oh, that’s so Sheldon” laugh, not a chuckle brought on by something truly funny. Familiarity doesn’t necessarily breed contempt where a sitcom is concerned, but it can most definitely breed content… as in the writers are content to trot out new versions of the same lines over and over again.

The latest episode of BATTLEGROUND, the fantastic Hulu series, did the damn-near impossible: It proved you can be funny and incredibly intense at the same time. The press conference held by Samuels was the very definition of awkward, and the standoff between the cop and the camera crew was tense as all get out. Throw in Cole’s shocking flashforward and a sweet moment for Ben and Lindsey, and this show continues to prove that it’s the best television show not actually airing on television.

I’m not sure which makes me prouder of all you TV fans out there: that Courtney Stodden has failed to generate enough positive heat to actually land a reality series or that the ridiculous web-show she launched last month (in which she waddled around complaining that her foot hurt but refused to take off her stripper heels) not only didn’t go viral but has proven to be wildly unpopular. Thank you for restoring my faith, peeps.