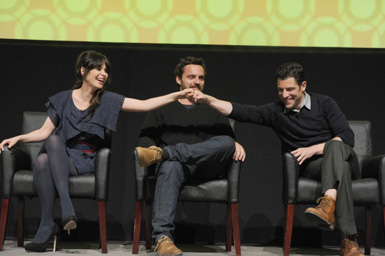 One has to love it when the cast of a new comedy series gets together to celebrate because it allows us to peek behind the curtain and see what is going behind the scenes.  At the recent Academy of Television Arts & Sciences screening of the season finale for NEW GIRL, it was a night of hilarity and funny reveals as the cast good-naturedly poked fun at each other. This is what I learned the cast, characters and show:

Fear of Birds
Max Greenfield is terrified of birds.  Seriously.  Co-star Hannah Simone had filmed a scene with a live vulture in the pilot, and Max was petrified.  But in his defense, he asked the audience if there were anything they were afraid of, and as shouts of snakes, spiders and sharks rang out, Max said, “See!  Now I don’t feel so alone anymore.”  As everyone laughed, his point was made.  Everyone is afraid of something.

Cece Does Actually Model
Hannah Simone has done a ton of modeling scenes on NEW GIRL, it is just that most end up on the cutting room floor and remain unseen by the viewers.  That glaring omission falls on the writers who sheepishly admitted that they write more material than can possibly filmed in 22 minutes each week and they would rather have too much to choose from in the editing room.

Nick and Winston Swapped Roles
When the show first debuted, Nick was intended to be the more mature, got-it-together adult of the group; but as the series progressed, Winston seemed to fit more naturally into the role, so the writers just began writing Nick as the closeted, immature adult and Winston as the one who has it together.  So while Winston began the season as a “lost” man, by the end, he is the one who is moving up in his career and has maintained a stable relationship.  Though Lamorne happily noted that in real life, “I’m a weird individual and they went there with it,” which explains Winston’s flirtation with his crazier side.

Improv Is a Big Part of the Show’s Success
While the actors are quick to give props to the shows’ writers, producers, directors and fine editing team, it was revealed that frequently they just let the cameras run while the cast is performing a scene just to see how they organically play it – and if they ad lib or improve a bit and it works, then it is left in.  Anyone who has seen the cast together LIVE, knows exactly what they are referring to.  They can riff on each other, in character and out of character, with seamless ease that brings the house down with laughter.

Jake Johnson Can Sing
While the show may be fond of poking fun at Nick, Jake Johnson’s co-stars and producers proclaim that he has the “voice of an angel” and most reluctantly Jake admitted to being a singer/songwriter in his spare time.  He would not, however, demonstrate any of his fine vocal abilities.  The guy is a love more shy than you would think!

Why Keep the Core Couples Apart
Liz Meriwether was the first to admit that it is her fault that Schmidt and Cece broke up in the season finale and she’s the one who put the brakes on the Jess/Nick romance for the moment.  She thought it was not realistic that these 20-somethings would be so quick to shed their fancy-free lives and commit to long-term relationships so soon when they are still just figuring out who they are.  She also wanted the show to stay true to the journey these characters are on and not rush them into relationships that they are not ready for – yet.  Liz emphasized that the two key ingredients to the show is “truth” and finding the “emotional core” in any given real life situation – then they throw the NEW GIRL twist on it to make it hilarious.

The Coyote Was a Real Diva
Jake Johnson felt compelled to admit that the biggest diva they have ever had on the show was the coyote used in the season finale.  Apparently, no one could make a sound around it or make eye contact with it and it had special diet restrictions that it required between each take before it would perform.  As the audience and panel cracked-up, all fun aside, Zooey shared how that the coyote was actually super scared of humans and all she had to do in her scene was take one step towards it and it quickly ran away terrified.

The Inspiration for “Meep, Meep”
Liz Meriwether also confessed that she was the one responsible for the “meep, meep” scene with the coyote with Jess and Nick.  She had been given that scene to write for the finale and after staring at the blank, white page for awhile, she just went with the one thing that come to mind:  Looney Tunes – the Road Runner.  And that ladies and gentlemen is how great comedy is written, just think of your favorite cartoon and inspiration will strike!

Zooey Read With Each Prospective Actor For the Show
Because she felt so invested in the show, Zooey actually read with each and every actor who came to audition for the roles on the show.  She was looking for actors she found inspiring and “bro’d out.”  While not exactly defined, it was suggested, that she was looking for the right mix of chemistry between the actors who would be Jess’ roommates and fortunately for Max, Jake and Lamorne, they had the secret “bro’d out” quality.

Max & Jake Dress Alike
Over the course of the lengthy audition process of NEW GIRL, Max and Jake got to be such good friends that they would text each other each time they had an audition to make sure that they did not wear the same clothes or colors that day out of fear they would cancel each other out.  As a perfect example, they stood up on stage pointing to their nearly matching blue sweaters, blue jeans and tan loafers.  But that extra precaution must have worked because it is now one year later and they are happily celebrating the end of the show’s first season.

NEW GIRL may be gone for the summer, but returns with all new episodes in Fall 2012 on Fox.  Here’s to looking forward to what we will learn about Jess, Nick, Winston, Schmidt and Cece next year!