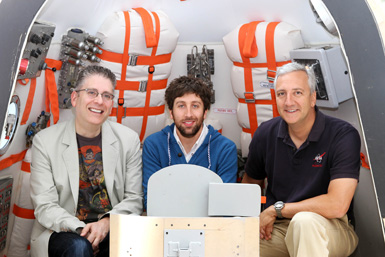 Because THE BIG BANG THEORY knows how to send its own show out with a big “bang,” for its 5th season finale it invited NASA astronaut Mike Massimino to make a special guest appearance.  The timing was perfect.  In the upcoming episode entitled “The Countdown Reflection,” Howard Wolowitz (played by Simon Helberg) is given the chance of a lifetime — to go into space.  Assisting, coaching and a times heckling Howard, Mike Massimino plays himself and clearly has a ball in the process.  Being one of the few men privileged enough to travel into space, Mike knows that no man – even one on the verge of getting married – can resist the temptation of outer space.  The finale wrestles with the conflict of Howard as he is torn between the call to venture beyond Earth’s borders, and his own personal happiness with his intended bride Bernadette (Melissa Rauch).  The tug-of-war of heart and happiness over fame and glory is powerful.

So as Howard struggles with balancing his equally tantalizing options and staying true to himself, his friends Leonard, Penny, Sheldon, Raj and Amy also weigh in on how to help Howard.  Love clearly beckons, but with the shuttle launch approaching there is little time to prepare for a nuptial ceremony.  With aplomb and good-humor, the show delivers a fun exploration of whether Howard can make all his dreams come true.

During a recent press interview, creator/producer Bill Prady, co-star Simon Helberg and NASA astronaut Mike Massimino talked about putting this momentous episode together.  Mike was quick to point out that the show had gone to great lengths to make the shuttle capsule and space suits as accurate as possible, even the detail as to the limited size of the spacecraft and the conversations the characters had in the capsule echoed of real life.  (For those interested in visiting, there is a replica of the Soyuz Capsule currently on display at the Paley Center in Beverly Hills, California.)

Mike further revealed that it is not uncommon for NASA to actually fly scientists into space to accompany their experiments, so the storyline in THE BIG BANG THEORY was not as far-fetched as one may believe.  Mike also loved the warm camaraderie on THE BIG BANG THEORY set as it reminded him of how it actually feels to prepare for a real shuttle launch.  It is not all about last minute checks, as astronauts are people too and they talk about all kinds of things when preparing for a launch.  Mike then hilariously recounted how his wife had called last minute to ask “where are the kids science projects?” right before a launch.   Life does not stop just because there is a launch scheduled and astronauts have to balance their personal lives and professional lives too.

As they talked about the experience of making this special episode, when queried, Simon admitted that he was loathe to complain during the filming any of the scenes in which Mike was in out of fear of being seen as weak compared to a man who has traveled into space.  Though Simon confessed he was mightily relieved when Mike complained that the boards beneath them were mighty uncomfortable during their shuttle scenes and asked for a pillow.  It was pillows for everyone after that, which made the long hours filming so confined a bit more tolerable.  Mike said that it was the one thing he tried to emphasize to new space recruits:  that they need to speak up.  The most important thing in preparing for a launch and when working together is to communicate – it saves a lot of grief and could save lives.

So while the show strove to be as accurate as possible, comfort was key and it helped them keep the atmosphere light for the comedy that they were hoping to capture.  After screening the upcoming finale episode, they clearly achieved just that – the episode conveys the spirit of warmth, affection and resounding humorous banter amongst all the characters.

To tease a bit about what to expect in “The Countdown Reflection,” keep your eyes open for a brief appearance by Howard’s previously unseen mother, a new and fun use for Google Earth, and a reason why stocking up on toilet paper can come in handy. Our BIG BANG THEORY heroes may be a bit space-obsessed, but they surprisingly have a soft-side that is exhibited in rare form in this episode.  While Bill Brady admitted that he is loathe to have any season end on a cliff-hanger and does his best to avoid arcing seasons, he did leave the door slightly open to new possibilities for several of the characters.  Just like in real life, relationships cannot be wrapped up with a bow and each of the core romantic relationships will undoubtedly continue to be explored next season. As to the final fate of Howard and his dilemma over the woman of his dreams and the ultimate dream to travel into space, that will be nicely resolved and fans will sit back and exhale with a sigh of relief and happiness.  The show may be called THE BIG BANG THEORY, but it certainly guarantees a fun-filled season ending.

To see the 5th season finale of THE BIG BANG THEORY, be sure to tune in on Thursday, May 10th at 8PM on CBS (CTV in Canada)