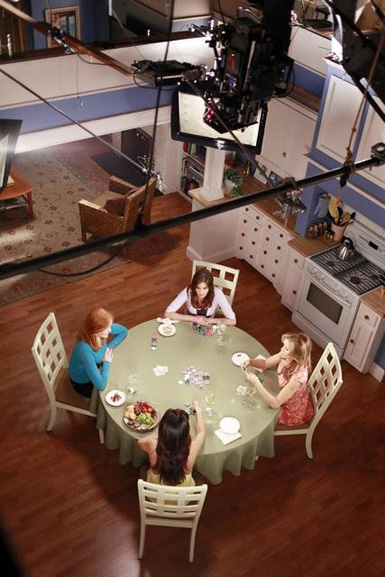 Looking back over the past eight seasons of DESPERATE HOUSEWIVES, there have been many familiar faces that have popped in and out of the series tying its hilarious stories together.  Straddling the worlds of drama and comedy, the series helped define a new television term “dramedy.”  Even when life is at its worst, there is a silver-lining of laughter embedded into the series.  From Mary Alice’s suicide to the first season murders of Deidre Taylor, Martha Huber, Rex Van de Kamp, to the Fairview Strangler, the plane crash and the tornado, as well as the untimely demises of Edie Britt, Nora Huntington, and Mike Delfino – life on Wisteria Lane has never been a calm, peaceful and safe place to live; but it was always a fun place to visit – if only to watch all the outrageous stories brought to life!

Through the years, we became invested in the lives of Susan, Lynette, Bree, Gaby and all the other housewives that have taken up residence on Wisteria Lane.  They suffered, survived — and at times celebrated — marriages, children, deaths, and an undue amount of inexplicable crazy adventures.  It was riveting and addictive — and we could not stop watching to see what would happen next.  The characters may in turns have been “desperate,” but there always was a wonderful thread of heart-felt compassion and love for each other as they coped with the unexpected twists of fate.  So we cheered, cried and prayed with them.

A few of the fascinating characters we met along the way included Bob Hunter and Lee McDermott, and Scavo offspring Penny, Preston and Porter. At a recent event celebrating the series finale for DESPERATE HOUSEWIVES, the actors who portrayed all these fun characters took a few moments to reminisce about the show.

As can be seen, Tuc Watkins, Kevin Rahm, Darcy Rose Byrnes and Max and Charles Carver all had a ball working on DESPERATE HOUSEWIVES and each felt privileged to be a part of such a momentous series.

With only the 2-hour finale on May 13th left to air, the series aims to wrap up its characters’ stories in such a fashion as to leave the fans fully satisfied in the end.  Look for a whole range of familiar faces to return and some fun nods to prior seasons as the show ties up the show that reminded fans of the value of family and friendship — and neighbors who have your back no matter how insane the circumstances may be. For a show that began with a shot in the dark, let’s hope that it doesn’t end the same way and that Wisteria Lane finally allows its residents to live in peace and happiness for a while.  That is how we would like to remember them – finally at peace and happy. They have earned it!