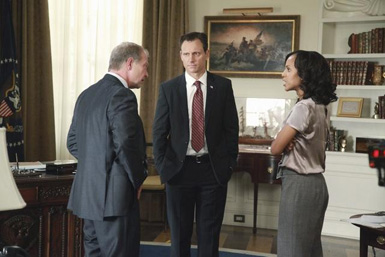 If you saw last week’s penultimate episode of SCANDAL, you know exactly what everyone has been talking about. Was it the fact that Gideon Wallace was stabbed in the neck by a pair of scissors by the Vice President’s scheming aid? Was it the reveal that the sex tape sent to the President was from 2 years earlier recording Olivia and Fitz’s first intimate encounter? No, what caught everyone’s attention was the sizzling, hot and oh-so-sexy scene where Presidential candidate Fitz Grant seduced Olivia. Then just as breath-taking was the intimacy with which they held each other in the final moments of the episode knowing that the days when no one was looking were over and they would never have any more stolen moments together. In an exclusive interview Kerry Washington talked about filming the challenges of filming those memorable scenes, and the possible ramifications for both Olivia and Fitz now that their secret is about to come out.

So after last week’s really hot, super sexy scenes, can you talk about the challenges of working on those types of intimate scenes?
KERRY: [Laughs] I will tell you that doing those scenes is the worst part of my job. I love my job so much, but those scenes make me so uncomfortable. Like usually acting doesn’t feel like work to me. It is a lot of work, but because I enjoy it so much, it is work that is enjoyable. But sex scenes are a nightmare. I am so close to the crew and I’m very excited that most of them are coming back for Season 2, which is great. So I kept saying to the crew because I’m so close to them, “This is awful. This is so weird!” These scenes are always hard, but especially doing it in front of this crew — they are like my boys. They are my like my family, so it was awful. Everything about it was awful. [Laughs some more] It’s also really funny because both Katie Lowes and I were working out and eating really clean, juicing, and eating organically — just really trying to take care of ourselves, and Tony is eating junk food and sleeping in. We were so annoyed ’cause the boys were so carefree.

Then those scenes with Olivia and Fitz sitting on the sofa were just mesmerizing to watch. What was that experience like for you as an actor?
KERRY: You know that’s really special to me. That scene was very moving to shoot. I don’t remember the last time you experience silence in real time on television like that. It’s one thing to say one minute, but it is truly one minute of silence. I think it is so breath-taking — and so brave on the part of writers and producers. I was also honored that they trusted us to fill that space with enough emotional life for the characters. That is would be interesting, and that people wouldn’t fall asleep. For me, the first time I saw it, it was such a gift because we were in that embrace as I’m snuggled into Tony’s arms, so I never saw the work that he was doing. So when I saw the episode for the first time, I was so moved by what was going on for his character. A lot times when you’re doing a scene, you’re looking at your other actors, so you’re aware of what the other actors are doing, but that was not the case in that scene. So for the both of us to be really struck by the intensity of it, I’m glad we were on the same page. It was so emotional.

How would you describe the current status of Olivia and Fitz’s relationship? They seem to not be together, but are longing to be together. Where do they see themselves?
KERRY: A lot of what that scene is about to me is two people really trying to do the right thing for their country, for themselves and for each other. I think after last week’s episode that’s where we are: two people who obviously weren’t together, then he showed up at her house, but they’re still not together. So every moment we see them together was in the past. But in the present, they’re feelings may be really complicated, but clearly they are not going there — at least for now.

We’ve seen glimpses, but is the First Lady a bit more clued into to how close Fitz and Olivia have gotten, or does she just think that they’re good for each other when they are around each other?
KERRY: Bellamy Young who plays the First Lady will blow you away this week. I promise you that question will be answered. But she is amazing. I think she is such a great actress, and what they have written for her is fantastic. She will just knock your socks off this week. As will Matt Letscher who plays Billy. He is just awesome in this next episode.

So are we going to see Olivia doing whatever it takes to preserve Fitz’s presidency, or is she going to want to hold back her cards a little bit?
KERRY: I think that’s an interesting question. I think there’s always a balance for Olivia. I think she’s most strategic when she’s managing a crisis and in her sort of relationships with people. Even when she’s going all the way for her clients, there is a delicate balance in how she manages information in order to do that in the best way.

What do you think is driving her, besides her obvious affection for Fitz, is there some self-preservation going on, or is it more that she just wants to protect him?
KERRY: You’ll see. It’s very complicated.

Speaking of complicated, what is it about Olivia that drives her to recruit and rescue these particular individuals that make-up Pope & Associates?
KERRY: I’ll tell you where it comes from and why it works — where the initial impulse came from and why it actually works for the office. Olivia is just a person who likes and needs to make things better for other people. She comes to this work of “fixing” professionally because she has an inner need to fix, whether it is for the person behind her at Starbucks or for the next Supreme Court justice. She is just somebody who cares for her fellow human beings and wants to take care of people who are in difficult, challenging situations until they feel like they can take care of themselves. So that’s where I think it comes from. But I also think she realizes that she works for the office — at this point in the season, you may not understand all the dynamics of the relationships and for each character, but each of the people who work at Pope & Associates has had their own personal crisis, if not more than one. So they know what it is like to have a seemingly worst-day-of-your-life. So when somebody walks through the door at Pope & Associates, all of the people in that office can really approach the situation with a sense of compassion and also with understanding and know how. They’ve been there.

Okay, lastly, are we going to finally learn what is the big secret with Quinn? Since we do not know why she was recruited by Olivia yet.
KERRY: It’s so hard! I wish I could tell everything, but I can’t! But at the end of the season finale, there will be one huge question that will be answered and everyone is going to be so fascinated and happy to have more of the full picture of the situation. And there will be another situation that will continue to go unanswered in a shocking way.

With that last fun tease, be sure to tune in for the first season finale of SCANDAL on Thursday, May 17th at 10PM on ABC (CityTV in Canada)