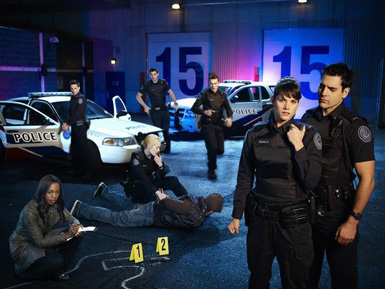 The second season finale of ROOKIE BLUE left fans wondering what was next for Officer Andy McNally, who was asked to surrender her badge after putting her partner Sam Swarek’s life in jeopardy while working undercover. Taking a few minutes to chat in an exclusive interview, star Missy Peregrym candidly shared what changes and challenges lie ahead both for her character and the rest of the rookies in the third season.

What’s your favorite thing about working on ROOKIE BLUE?
MISSY: Definitely the people. We laugh a lot when we’re filming even though we have some tense situations coming up. We’re always being told to be quiet. It makes a huge difference when you enjoy working with people. Also I love playing Andy. It’s the first time that I’ve been actually able to portray a character for this long because it’s the first time I’ve been on a series where it went for 3 years. So, obviously, it’s exciting to kind of go back — and I learn with the character as I read the scripts, which is a lot of fun.

You’ve kind of mentioned it, but are we going to be seeing some more dark turns for Andy’s world coming up in Season 3?
MISSY: Yes. I would say it’s kind of bittersweet. We kind of start the season with Andy and Sam seeing each other again. They haven’t seen each other for three months, which is one of the conditions of Andy’s suspension. She wasn’t allowed to see him, so she kind of took off. Then when she gets her job back. She came back and Sam’s not pleased about that. So Sam and Andy are in a position where they are trying to work out their relationship — and the theme is “be careful what you wish for — so Andy gets her job back and it’s great, but there’s conditions. So she’s back together with Sam and it’s awesome. It’s the first time they can really explore a real relationship, but it’s very complicated — obviously, because the dynamic has changed. Sam can’t help but be over-protective of Andy. So there’s a line of “This is my job and we’re partners,” but he’s her boyfriend and he’s going to look out for her. So the lines get blurred. Then just when Andy is trying to find a balance, she sees her mother at work. They both end up on the same call and it totally throws Andy ’cause she hasn’t seen her mother in 12 years. So it’s a very difficult thing to deal with and Sam is being really protective of her. But Andy doesn’t know how she feels, so that’s complicated. That’s all I can really tell you right now.

That’s actually quite a bit!
MISSY: [Laughs] That’s a lot, but there’s more stuff coming. It’s a really good season. I mean, it’s so fun when you get further along because everybody just really connects with the characters. So it definitely feels heavier any time something happens.

They seem to be pushing the limits of what Andy can tolerate. Do they ever really give her a second to breathe?
MISSY: [Laughs] I don’t know if we have time for that in 13 episodes. There’s definitely moments where Andy is starting to be comfortable. But isn’t it like real life? The second you get a grip, something else happens and you’re evolving again. I feel like that any way in my personal life. So I’m like, “Okay, please can we just stand still for a second and I’ll learn something later? I’m so sick and tired of learning this patience rule.”

You mentioned the time-jump, are we going to be seeing everyone 3 months later?
MISSY: Yes. It’s going to be picked up for everyone there.

So, obviously, there’s a lot that could have developed in Andy’s absence. Will we be seeing more of the storyline involving Luke and Gail? It looked like they were kind of flirting with that at the end of last season.
MISSY: No. I don’t know how much I can say. There’s a twist because we get a new rookie this year. Not really a rookie. He was in Afghanistan. So he was in the military and then he comes back and he gets on the force, and he’s had a past with Gail. So that definitely throws a wrench with Chris Diaz.

We also saw that Gail was in a bit of a triangle with Dov and Chris last season. Is that going to be explored further, or is that kind of dropped to explore other relationships?
MISSY: I don’t remember that being explored. I think there is some growth in that area. I think Chris and Dov kind of get back on track because that was hard on their friendship. Aah! I’m trying to remember which is which now. I honestly can’t remember if I’m remembering things because of filming or because it aired last year. [Laughs]

You have a great rapport with your co-star Gregory Smith. Do you two get an opportunity to work more together this season?
MISSY: Man! I’m always asking to work with him. Yeah, there’s a few scenes. But our storylines don’t really connect. He’s going through something crazy this year. There’s an experience that he has at work and it kind of rocks the rest of the season. But there’s a little bit of bonding with him over that experience.

We’ve also seen in the previews that Bill Shatner is guest-starring. Did you get an opportunity to work with him?
MISSY: For about 5 seconds. The scene that he was in, I literally show up at the end. He was very nice and a total trooper. For being his age and running around as much as he was, he was a lot of fun. But I didn’t have as much time with him as Enuka or Greg.

Finally, maybe you’d could talk a bit about Andy and Traci’s friendship. Does it allow them to be closer this season?
MISSY: Yeah, it definitely does. She’s going to be trying out to be a detective. That’s where her goals are this year. So Andy and Traci are definitely closer. Andy is going to stick up for her and is so excited that Traci is doing this. So Andy’s kind of got her back as she is essentially a rookie again in this new department and there’s things they bond over.

To see the next chapter in Andy and Sam’s relationship and the new challenges the rookies face both on and off the job, be sure to tune in for the third season premiere of ROOKIE BLUE on Thursday, May 24th at 10PM on ABC (Global TV in Canada).