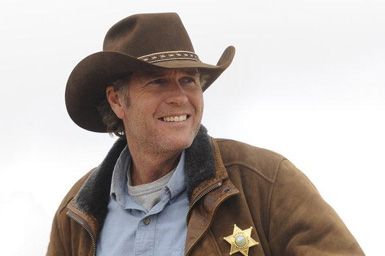 The name may sound innocuous, but LONGMIRE is a show worth checking out.  It invites us into a modern tale in a sleepy western town where insidious evil lies beneath the surface.  Starring Robert Taylor as Sheriff Walt Longmire, a man consumed by grief seeking solace in a bottle, he reawakens from his alcohol coma when a dead body is found.  Murder has reared its ugly head in his backyard and it requires Walt to look at everyone around him in a new light.  There’s his right-hand man, Deputy Vic Moretti (Katee Sackoff); his political rival, Deputy Branch Connally (Bailey Chase); his best friend Henry Standing Bear (Lou Diamond Phillips), and his rebellious adult daughter, Cady Longmire (Cassidy Freeman).  Set in the fictional Absaroka County, the story is backdropped by the lush Wyoming mountains and plains — which is the perfect setting for a town that gets a sharp reminder that the root of all evil is man itself.

Walt is a flawed hero, but with a strong heart.  The loyalty of his friends and family even after he has long since abandoned all of them is a testament to the man he is even in his darkest hour.  LONGMIRE may be Walt’s long journey back from the edge of darkness.  Recovery from soul-wrenching grief and guilt, anesthetized by alcohol is not easy; but challenged for his job and driven to see that justice is served, Walt struggles to find a killer before he (or she) slips away; and torn between what he knows to be true and the mounting evidence against a life-long friend, Walt won’t stop searching until he catches the guilty party.

LONGMIRE hails back to a time when drama was a tale worth savoring slowly and one piece at a time.  It is not in a rush to tell its tale.  It wants us to see the incremental changes necessary to track a killer when the evidence is flawed and all one can trust is their gut and instinct.  Fortunately, Walt’s instincts have not been dulled during his time away and he is a ruthless lawman when he is cornered.  Don’t let the hats fool you, where one wears a hat, there are plenty of guns at play.  The year may be 2012, but when one lives in the wild west, time passes differently and frontier justice is alive and well.  Toss in some boiling tensions with the indigenous American Indian population nearby and things are set to spark a centuries old feud at any moment.

The initial episode of LONGMIRE may feel slow at first, but the pacing is deliberate.  Viewers are lured into a sense of calm and security that can be ripped away in a second.  Real life is not about mood music setting the tone, it is about how life happens without notice.

Definitely make time to discover the murky world of LONGMIRE and find out why everyone is talking about it.  LONGMIRE premieres Sunday, June 3rd at 10PM on A&E Network.