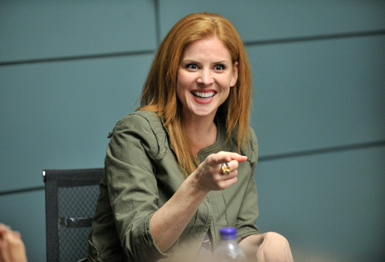 Proof positive that behind every successful man really does stand a great woman comes SUITS’ secretary extrodinaire Donna Paulsen. One-part legal eagle, one part right-hand man, Donna isn’t just always there to lend hot-shot attorney Harvey Spector a helping hand, but a bit of well meaning advice as well. Advice that Spector will most certainly need when he finds his career in jeopardy during SUITS’ upcoming second season. Or at least that was our big takeaway after spending some time with her portrayer Sarah Rafferty on the Toronto-based set of SUITS where she teased what challenges lie ahead for both Harvey and Donna when the hit USA series kicks off its second season on Thursday June 14th.

On What’s Up With Donna
SARAH: I was surprised to find out that Donna, who I like to say is always right and I enjoy that aspect of her.  But she’s not always right.  In episode 5, she gets [Harvey] wrong.  She totally gets it wrong, and I think that’s incredibly confusing to her.  I think she’s just always been right, always dotted her t’s and crossed her I’s. She’s really thrown by something that happens and then there’s that kind of lingering confusion and doubt and remorse are there.  So it’s a good opportunity for that mask to kind of fall.  I mean, Donna loves putting on different masks.  She’s an actress.  She likes role-playing in that way, in an actory way and you can see that.  You get a chance to see that fall away.

On Donna and Harvey’s Relationship
SARAH:  Another really thing that I think is really great about Donna — and sometimes a person’s greatest quality can be their biggest flaw  — she’s intensely loyal and brave in her loyalty.  She’s sort of doggedly loyal.  She knows that she knows Harvey better than anybody and knows how he’s going to behave, understands that he’s a moral guy.  She understands how loyal he is and what he will do on behalf of his friends and loved ones.  So there is a situation where her loyalty is thrown tremendously tested.  She goes as far as she possibly can to protect him and that can maybe cloud her judgment a little bit.  They go way back.  They were at the DA’s office together and that’s when they became the team.

On Hardman’s Return
SARAH:  I think with Hardman, the balance of power gets thrown off and I think for Harvey and Jessica that it’s complicated.  Everything becomes so much more political and so much more delicate and you have to really try to understand where people’s allegiances are and that kind of thing. I think Lewis’ character is caught in that in a way that’s really dynamic.  I think introducing Hardman just makes all the relationships more dynamic in a way.  I think it’s really exciting.

On Mike Piercing Harvey and Donna’s Armor
SARAH: Mike – at first you’re drawn to his brain and his talent and he’s very charismatic.  But he’s right, like he does see through.  There’s something about Mike too though that he, for Donna, is like a little brother quality.  And Donna gets the opportunity to see a little bit of the qualities of Harvey from the past.  There’s some qualities that they share. Also Mike and Donna can share an understanding of who Harvey is together.  Like they’re like on the same team.

On Fan Reaction
SARAH: I think people are connecting to [Donna’s] sense of humor; her wit.  I mean, I wish I could think as fast as she can.  She’s just quick.  She works in a man’s world but she doesn’t feel like she’s competing with men.  She’s a full woman.  It’s not even about that.  She’s who she is in this world. I think people are connecting to her wit and her confidence.  That’s kind of got it’s own sort of sexiness.  That kind of like strength and going toe to toe with anybody.

While hinted at, just what kind of trouble Donna and Harvey land in the middle of is still unclear.  But if it has the entire firm of Pearson Hardman shaking in their boots, it’s bad.  It’s real bad.  Thus, be sure to tune in for the 2nd season premiere of SUITS on Thursday, June 14th at 10PM on USA Network to see what legal quicksand they are struggling with all season long.