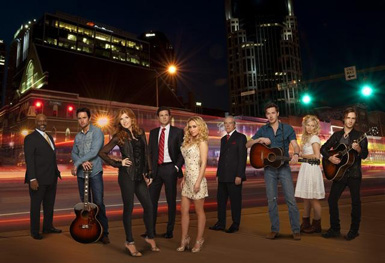 You’ve seen the commercials. You’ve heard the hype. Now there’s only one thing you want to know: Which of the new fall shows are worth watching and which should be avoided at all costs? In this continuing series, we give you the scoop on some of the most highly-anticipated shows of the season, with today’s subject being ABC’s NASHVILLE.

The Plot: A legendary queen of country (Connie Britton) music struggles to maintain her place in the spotlight while dealing with an ambitious rising pop-country vixen (Hayden Panettiere) who wants to knock her off the throne.

The Snap Judgment: To say that NASHVILLE was nothing short of music to our ears would pretty much be the understatement of the year. And while it’s no surprise that Connie Britton delivers yet another emotionally poignant performance that has “For Your Consideration” written all over it, what sure as heck was is the affect she has on her fellow cast mates. Talk about raising the bar! Hayden Panettiere proves there is in fact life after HEROES with her absolutely wonderful, not to mention little too believable (!) transformation into ambitious pop-country vixen forced to grow up far too fast. As Lamar Hampton, Rayna’s powerful and controlling father, Powers Boothe looks to give Larry Hagman’s J.R. Ewing a run for his money in the villainous patriarch department. While Jonathan Jackson’s aspiring singer/song writer will finally give the general viewing public a taste of the smouldering sexy bad boy that GENERAL HOSPITAL fans have known for years. Add to that a compellingly written pilot that paints a not-so-picturesque picture of a politically-charged town filled with the requisite number of fame-driven and/or power-mad characters who will do anything to succeed and what you’re left with is one of the few Fall pilots that actually has us salivating to find out what happens next.

The Conclusion: More scintillating than DALLAS and far sexier than SMASH, the country-music infused primetime sudser is pretty much guaranteed to be next season’s biggest breakout.

NASHVILLE airs Wednesdays at 10PM on ABC (CTV in Canada).