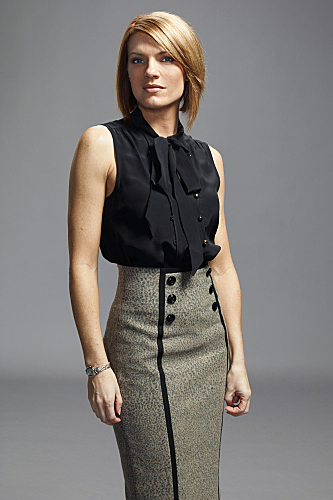 “I don’t want this to get back to the people at Showtime, but I keep wondering why they send me money because I probably would do this for free,” was how actor Kathleen Rose Perkins characterized her dream job playing Network Executive Carol Ranson on EPISODES, which returned to television this past Sunday July 1st on Showtime (Mondays at 9PM on TMN in Canada)

And while there’s no denying that Rose Perkins is being somewhat facetious in her offer to forgo a much-deserved paycheck in an effort to be apart of what is far-and-away the summer’s funniest comedy, there’s no denying a kernel of truth to her admission. Particularly having already had the pleasure of devouring the entirety of the show’s ridiculously stellar second season that follows the continuing misadventures of writers Sean and Beverly Lincoln [Tamsin Greig and Stephen Mangan] as they attempt to navigate Hollywood and transform their upscale British comedy Lyman’s Boys into a watered down Americanized version called Pucks starring former FRIENDS star Matt LeBlanc.

“The first season was completely written prior to them [Co-creators David Crane and Jeffrey Klarik] casting anyone other than Matt, so when we started shooting we were just trying to act exactly what they had written and what they had in their mind prior to them meeting us,” explained Rose Perkins during a recent one-on-one with the TV Addict. “With the second season it was very interesting because you get to see what they expect out of the actor that they cast and so reading it I was like, ‘Oh this is what you think of me?’ There were some challenging parts and a little bit more demanding of a schedule, but what an amazing thing to be able to do more of and get an opportunity to develop this character and find out exactly what makes Carol tick.”

Turns out, when Carol isn’t busy managing the fallout following Pucks’ less than stellar premiere (Or as one television critic so succinctly put it, “Pucks Sucks!”) she must juggle an increasingly messy personal life that finds her having an affair with Network President Merc Lapidus behind the back of his beautiful blind wife Jamie (Trust us, it’s far funnier than it sounds). “She been in this really long relationship, a torrid affair with her boss and in the second season you’re going to see Carol’s frustrations come to the surface,” explained Rose Perkins. “She’s getting a little antsy and might give Merc an ultimatum as far as their future goes.”

And just like that Perkins inadvertently summed up why EPISODES has succeeded where so many other Hollywood-centric shows have failed. Unlike countless shows that have quickly fizzled out in their effort to take audiences behind-the-scenes of a television or movie production (See: ACTION, GROSSE POINT among many, many others), the success of this Showtime laugher relies on the character’s hilarious and hijinx-filled relationships off camera, versus the far less exciting happenings on. One such relationship is Carol’s blossoming friendship with Beverly.

“Tamsin Greg [Beverly] is one of the best female actors I’ve ever had the privilege of working with. It’s so safe, so comfortable, and my scenes with her are my absolute favorites to do,” admitted Perkins. “Like every women in this business, we’re often asking ourselves, ‘Where are the women? We want more woman! Where are the funny women?’ So to have two funny women, being woman, really feminine and silly, it’s just a dream to be able to do that. Plus, we get high together — we didn’t really get high, we pretended to be high — and it was absolutely the best. I don’t know what I’m going to be able to do after this.”

Which, as it would turn out, is just one of the many reasons why we’re Rose Perkins is rooting for EPISODES to continue.

“It’s funny, I joked with David Crane that we need to keep this show going because I don’t think I’m going to get another job! Nobody is going to hire me after this because all I’m doing is making fun of these Network Executives. And he was like, ‘Don’t worry, none of them think they’re anything like that’ And it’s true. Anytime I’ve spoken to anyone who is an executive they’re like, ‘Oh My God… you are so great on the show, your character is so awesome and it’s so funny because I’ve worked with people just like that.’ They never think it’s them, so hopefully I’ll be okay.”

EPISODES airs Sundays at 10:30PM on Showtime (Mondays at 9PM on TMN in Canada)